Dishoom in Kensington is the latest branch to open of this popular, award-winning London restaurant chain that’s styled itself after Bombay’s once ubiquitously popular Irani cafés of yesteryear.

From the inside, however, this particular place, which only opened last month in December, is more reminiscent of the funky Bombay jazz clubs that sprung up during the 1930s thanks to the introduction of the European movement affectionately known as Art Deco.

It’s apparent that a lot of thought and attention has gone into capturing the architectural style of said period. From the rusty orange colour tones to the large wall clock and fancy hanging chandeliers, Dishoom’s largest branch, with over 200 seats, has done a fantastic job with its lighting and decor.

As for their menu, then Dishoom has confirmed with FtL the following: “All of our lamb and chicken is Halal and is sourced from Halal certified suppliers. We have copies of the certificates (HFA). That is across all our cafes.

“Please note that we also have alcohol, sausages and bacon on our menu. All non-Halal items are cooked on a separate griddle or in a specific pan. All utensils are washed thoroughly after being used for these products. These items are also stored in a separate part of the refrigeration area.

“Many of our chefs strictly only eat Halal – so they are very conscientious in making sure all of this is observed.” Nice idea these Okra Fries palpably let down by the execution.

We certainly weren’t sold by the idea of soggy lady’s fingers, especially with only a handful for a hefty £4.20, that left our fingers positively oily. This trio of vegetable samosas accompanied by a trio of colourfully vibrant sauces were far better executed.

Wrapped as these dainty samosas were in thin, non-oily filo pastry, they were perfectly crispy and perfectly seasoned, with a delicately spiced potato mixture on the inside. Arguably the best was the sharp minty green one followed not too far behind by the chilli and tamarind.

In fact, it was difficult to pick a winner, they were so good.

The former was more fruity than the chilli.

As for the latter, which was the thickest of the three, then this managed to deliver that tangy sweet kick one would hope for from such a sauce. Paneer Tikka for the kids! A plate no one cub would be able to finish. As such, we ended up cancelling one and sufficing with the above. Sadly, however, they either didn’t like it, didn’t get it, or both!

As a combo it did work though, with the sweet coleslaw, courtesy of the pomegranates, marrying well with the, admittedly, overcooked potatoes, which broke apart effortlessly under the fork. The paneer itself was very thick and covered in a strong, musky mint sauce.

Whilst the dish certainly needs working on (it appears to be a disparate collection of bits and pieces), it’s likely to be unsuitable for the unrefined palates of children. Spicy Lamb Chops – They lie overnight in a special marinade of lime juice and jaggery, warm dark spices, ginger and garlic. Blackened by the grill. £11.90

These French-trimmed lamb chops were definitely full of spicy flavours, cooked bang on medium, expertly charred to lend that much needed smokiness, sprinkled with pomegranate seeds, and presented alongside some mint leaves and a segment of lime.

Make each mouthful count, however, chewing these for all they are worth, because you only get three.

And be sure to also give these a good squeeze of the lime, as it’ll help cut through the spices and strong charring.

Also, don’t be afraid to nibble on a pomegranate seed or two along with a mint leaf – it actually works in imparting a touch of minty sweetness. Inspired chops! Sheekh Kabab – Minced lamb is marinated with lime, coriander and cumin, then grilled. £8.20 Two average-sized and average-tasting kababs, that were, on account of a distinct lack of Indian-inspired spices, more Middle Eastern in taste than anything else.

As a result, and unlike the above lamb chops, the squeeze of lime doesn’t so much complement these kababs than spoil whatever’s there.

Let’s just say that our forks were far more focused on the chops than these soft kofta kababs. Although the pieces of meat in this Mutton Pepper Fry were tender enough, this South Indian dish suffered from one major drawback: the ultra-intense heat of the spices.

While the meat was marinated in red chilli, ginger and garlic, and cooked with black peppercorns and whole spices, before being garnished with curry leaves and a wedge of lemon, it was the chilli and peppercorns, especially with the acrid heat of the latter, that combined to overpower everything within the vicinity. Considering that this was meant to be a Chef’s Special, we also didn’t appreciate the unclean plate! As you can imagine, therefore, we were struggling by the end.

The only redeeming factor here was the Malabar-style soft paratha, which, despite being a little larger than an Indian puri, was buttery and tasty. Awadhi Lamb Biryani – The lamb is prepared with stock and spices, then layered with rice and cooked in traditional ‘dum’ style. £10.50

We always look forward to the touch of theatre brought on by the experience of cutting open the pastry ourselves and enjoying the fragrant smell of spices that emanate from a dum biryani. Why then would you present this with the pastry already cut off? For the sake of convenience?!

Here is wisdom: diners not only enjoy the cutting part of a dum biryani, but also appreciate the heat being maximally retained by the pastry top.

What’s more, an inkling over whether a restaurant might be skimping can arise when saffron is neglected in any given biryani. Be that as it may, this was, nevertheless, a well cooked dish, albeit a small portion, that had us fighting for the few bits of marinated lamb hidden away therein.

Additionally, the raita was instrumental in livening up the above. Perhaps a pinch of chilli though could have enhanced things even more. Looking past the singular garnish of a cardamom pod, the rose lassi was, on account of a lack of yoghurt, more a milkshake than a bona fide lassi. Nonetheless, for what it was worth, it was pretty good.

As for the Limca then this was your “imported” Indian equivalent of a 7-up. This was a dessert of two-halves. The first was the chocolate pudding which, though advertised as “melting-in-the-middle”, turned out to be anything but. Moreover, the quality of the chocolate appeared to be mediocre at best, with a bitter aftertaste.

The other half, i.e. the Kashmiri chilli ice cream, while being a peculiar flavour, did well in tempering said bitterness to the extent that this chocolate pudding turned out to be a decent attempt. The flavours in this Indian-inspired Eton mess were gorgeous, with the soft strawberries, subtly sweet cream and crispy-cum-crunchy meringue combining effortlessly to deliver a winning combo.

If this is the mess the memsahib creates, then we’ll happily clean it up for her any time she wants! More like the original milk lollipop! Nothing that memorable here.

THE ROAR
Dishoom
3 FTL's Roar
2 Pride's Roar (2 Roars)
Alcohol/ Pork?
FSA HYGIENE RATING
Last Checked: 20/2/18
Facilities
Summary
Had the food matched the resplendent decor, lively atmosphere, clockwork-like service and impeccably astute staff, then Kensington's Dishoom would have been looking at something closer to a 5/5 Roar rating than what it's ended up with. Although we recognise that the restaurant was in the middle of a soft opening, we were expecting far better, especially given the steep prices, and their popularity and pedigree. Whether they'll be able to improve enough to impart a certain level of finesse to their dishes is the inevitable question. We don't think, however, that they'll be raising the culinary bar any time soon.

Having said that though, if you stick to our Menu Recommendation below, then it's worth visiting if only to experience the novelty factory of a beautifully decked out restaurant.

Another plus point is that although it has a bar area, this is separate from the dining hall.

They also serve traditional breakfast from 8am onwards on weekdays that might be worth exploring.

Finally, with such great service and attentive staff, it'll be a brave person to ask for the 12.5% optional service charge to be removed from their bill! 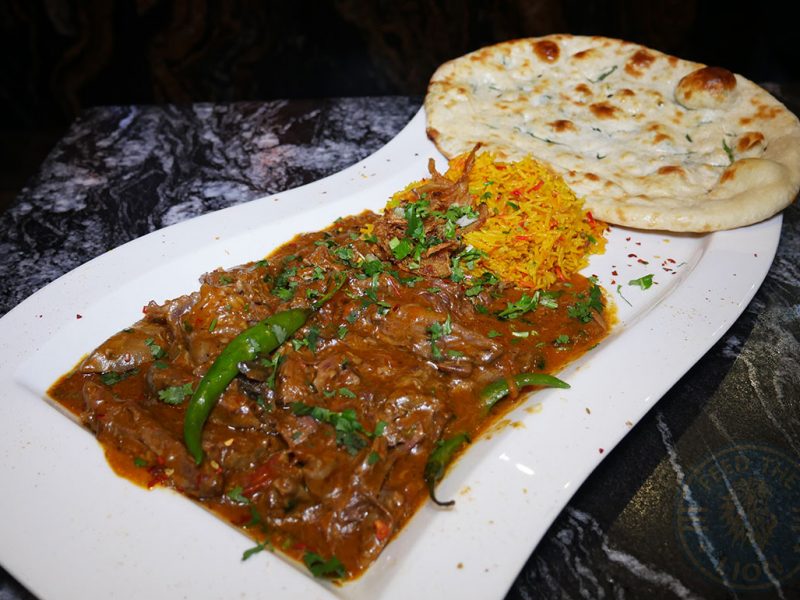 Curry houses ‘will be ba...