As anyone who tends to regularly eat out in London will know, the Capital’s Halal culinary landscape is as rich and diverse as it’s ever been.

These are exciting times for restaurateurs, with innovation and the spirit of entrepreneurship pushing the boundaries like never before.

Take the number of restaurants specialising in gourmet burgers that have hit the market in the past year alone. While it wouldn’t be an exaggeration to suggest that this particular scene may have now become somewhat saturated, at the same time, however, the fierce competition is driving these ventures to think outside the box and invent some new and really innovative burgers.

But, what’s perhaps even more exciting is to see focus being directed towards steaks, with recent steak houses committed in sourcing quality cuts of meat, while seeking to ensure a unique dining experience that concentrates not just on the eating, but, more importantly, the cooking of the steak.

And so, Feed the Lion brings you some of the Capital’s top Halal steakhouses and restaurants.

London Halal steaks cannot be mentioned without the mention of Norbury’s Steakout, for they are the original steakhouse.

Famous for their innovative approach and prime cuts of sizzling meat, Steakout is the place to come for a unique dining experience which not only pushes the boundaries of flavour but is also 100% Halal. HS&Co. is the latest restaurant to hit the impressive array of new eateries that have open in Stratford in recent times.

This one claims to be “East End’s largest steak restaurant”, and brings you Irish Steak cooked on the famous Josper Grill.

They do a number of cuts including the 200g Fillet Steak below that’s presented on a dark wooden rustic-looking board with pickled red cabbage. Fillet Steak – Cut from the Tenderloin, this is a very lean steak with little amount of fat. Recommended not to be cooked more than medium rare. (200g), £20.50

Meat House London is a large steak house in Islington that offers a number of impressive cuts including a 14-day dry-aged Tomahawk.

This one comes with an assortment of well-cooked charred vegetables – vine tomatoes, carrots and courgettes – with all steaks served with one side (below is spicy rice) and a sauce of your choice – Bearnaise, Mushroom or Peppercorn. Established in Harrow, west London, Toro’s Steakhouse is a large establishment which, while offering their steaks as either Sizzlers or plain normal, encourages diners to experience the former. The entertainment factor here involves the steaks, along with a side (french fries, pasta or rice), being brought out on red hot cast iron plates before a rather watery sauce of either garlic, pepper or gravy is poured directly onto these fiercely hot plates causing them to ferociously sizzle and spit.

The sizzling Surf ‘n’ Turf below, which comes with two sides, comprises of butterflied prawns and fillets of steak resting atop spicy rice and chilli fries. And for those seeking some crème de la crème, then they also offer a Filet Mignon which, though not on the menu, requires pre-ordering. What sets this restaurant apart from the rest is the exotic steaks which, when coupled with the sound and smells of sizzling steaks being prepared all around you, promises to deliver a memorable experience. Aside from serving one of the best burgers we’ve ever had the pleasure of devouring (The Lone Ranger), Brioche Burger on Green Street in West Ham also offers 21 day dry-aged Aberdeen Angus steaks that are presented on smart, custom-made wooden steak boards.

And with that you have the option of either peppercorn, Bearnaise mushroom, or beef sauce. With two branches – one in Eton and the other in Ealing Broadway – Flaming Cow is an impressive joint that does a Vintage 40 day, dry aged, 8oz burger which simply floored us. In addition, however, they also have a delicately smoked 28 day, dry aged, rump steak on the menu.

Presented with a simple salad, the chunky piece of steak is well charred and boasts impressive griddle marks.

Certainly one to consider if you’re feeling that carnivorous urge. 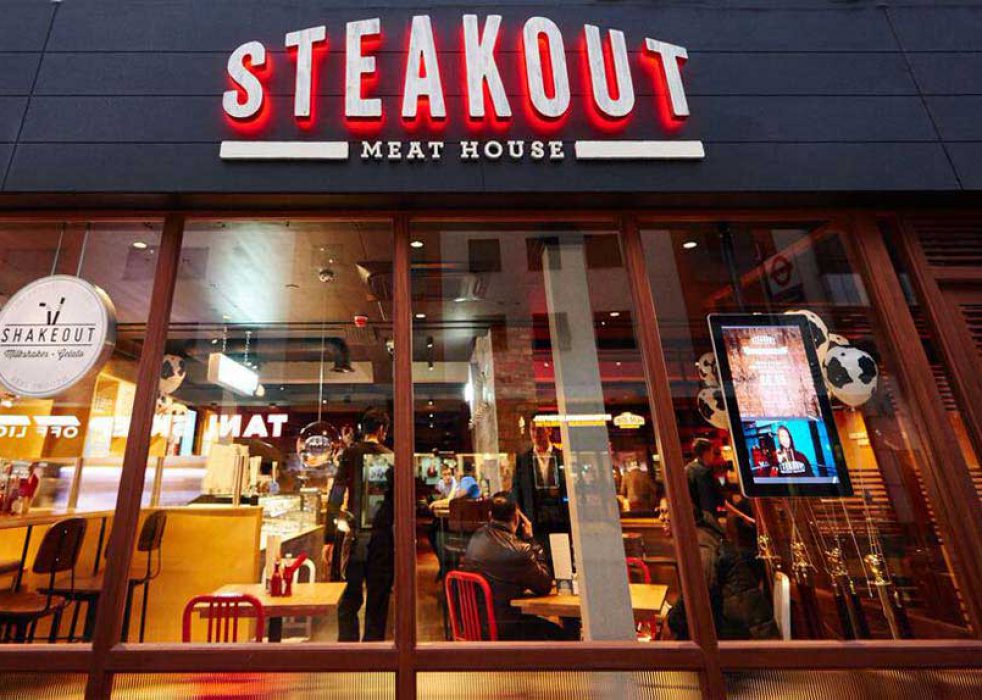 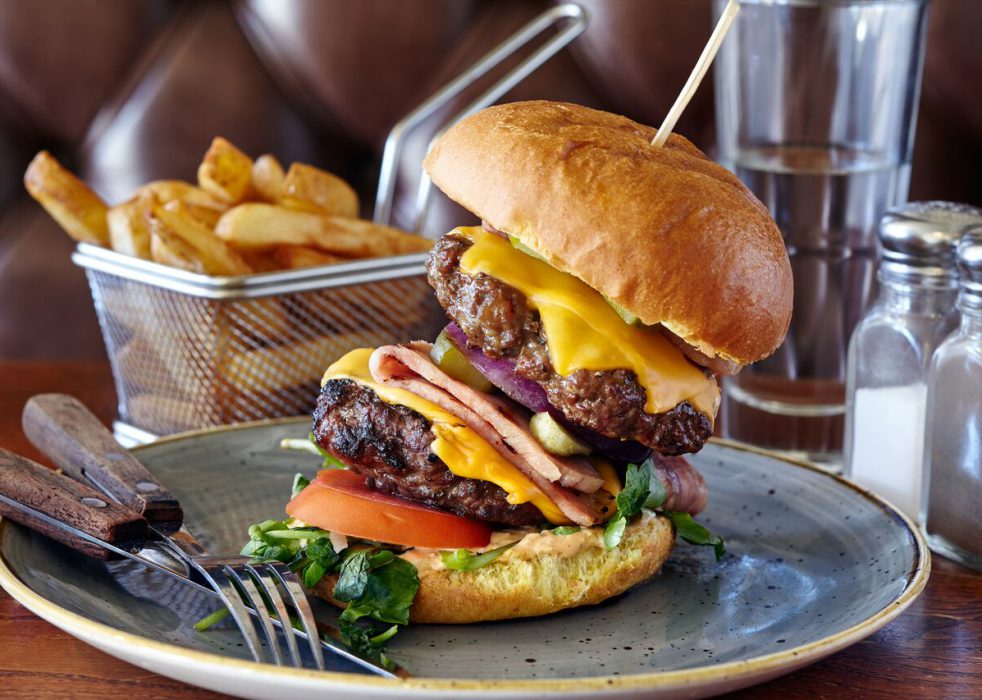 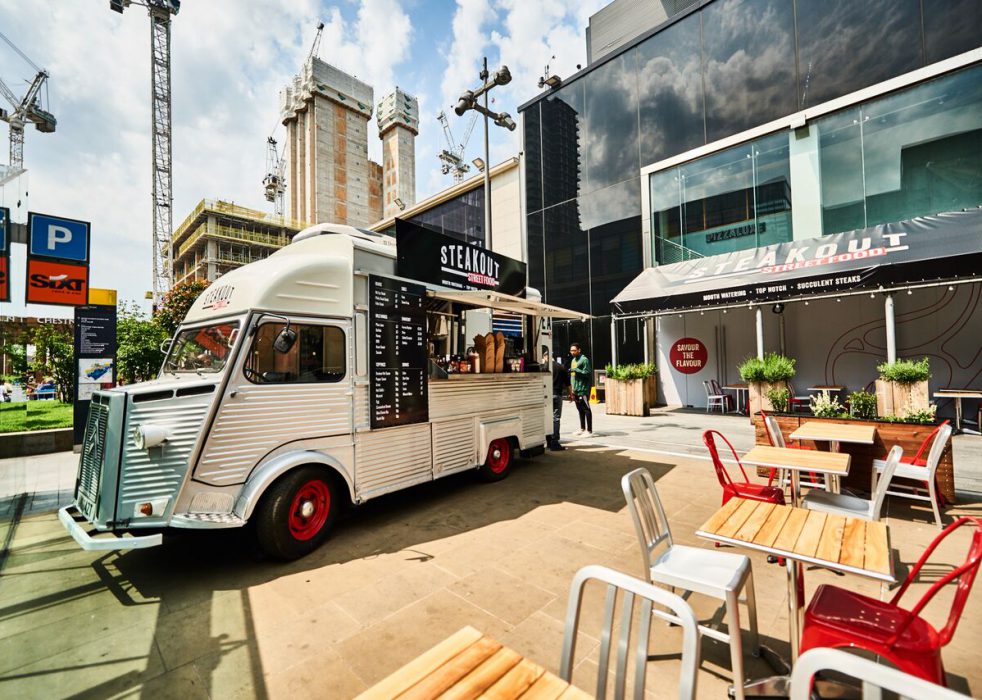 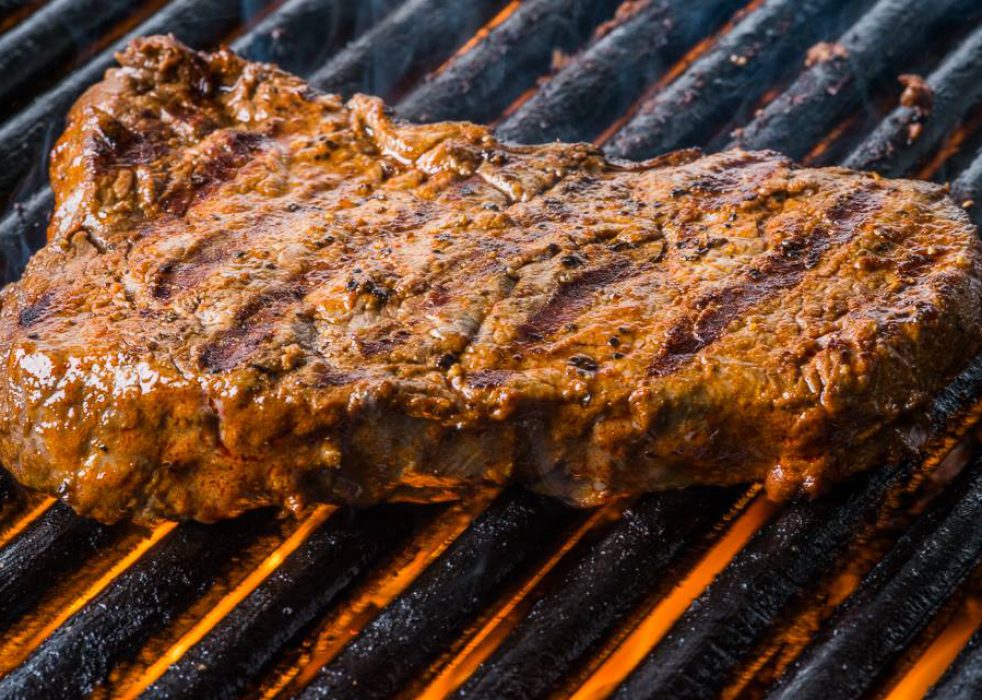 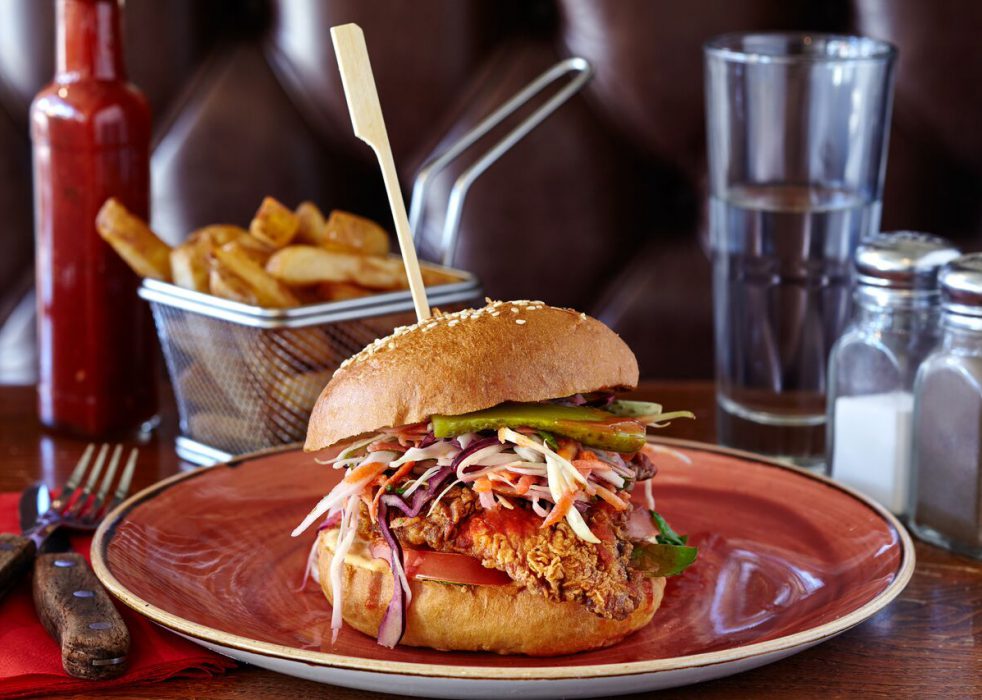 Originating in early 2008 we took the known into the unknown; taking the all so common beef steak, tenderising, marinating with unique flavours and serving in our sizzling Steakout style…the result?

It went down a treat! Soon after we became the most recognised halal steak dining restaurant in the UK.

Now were just running to feed the frenzy! With rapid expansion plans across the country stay tuned for a Steakout near you coming soon!