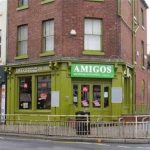 Located on London Road and the corner of Cecil Square is a large restaurant that uniquely offers fully Halal Mexican cuisine in the heart of Sheffield’s Highfield.

Having first opened in 2010 a few roads down from where it’s currently located, Amigos Mexican Kitchen eventually moved to a bigger place in 2012.

In 2019, the brand tasted success for all its hard work when it was named the ‘Best Mexican Establishment’ in the north of England at The Food Awards.

Catering for some 100 guests, the top floor is available for private hire, with plenty of seating located on the ground floor.

With tiled floors, pastel shades, plenty of dark wood, and Mexican paraphernalia, this split-level restaurant is airy and spacious, thanks to a skylight roof top, and offers traditional cuisine and grilled dishes. 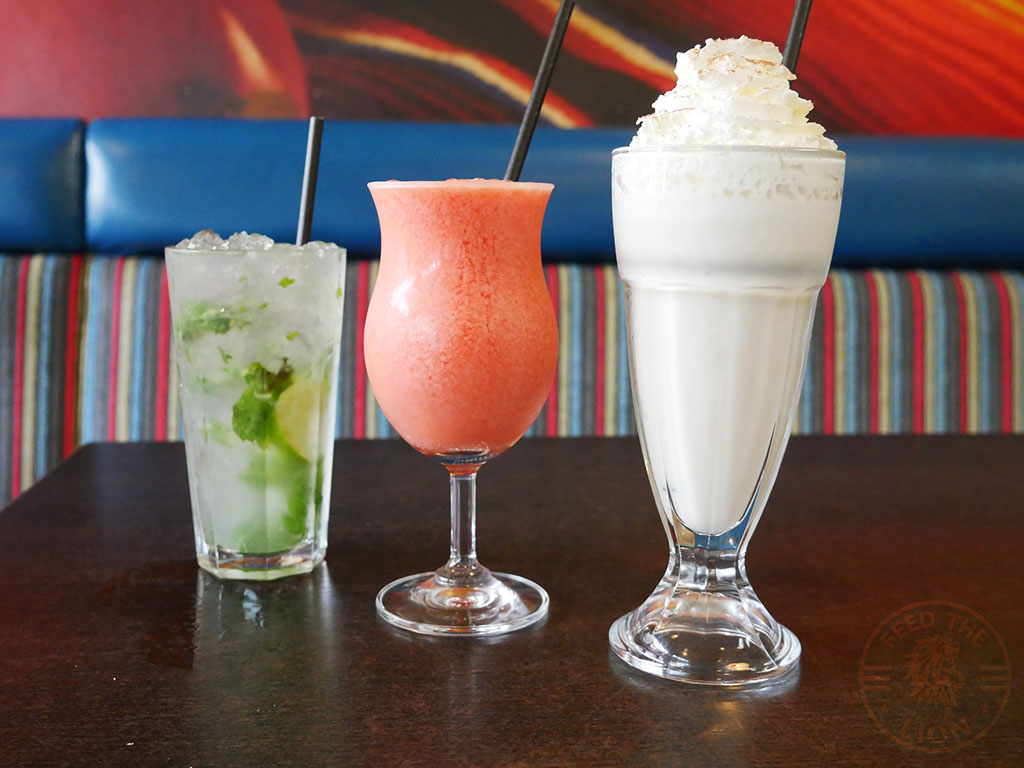 We weren’t expecting drinks as good as these at a place like this. The Strawberry Margarita, which came highly recommended, was fantastic, with a kick of mint and full of flavour.

Despite a slight difference of opinion, with one Lion enjoying the freshness of the mint, and the other wanting some more, we were unanimous that The Virgin Mojito did enough to satisfy our tangy tastebuds.

While acknowledging that most would find this version totally acceptable, we still prefer our milkshakes, in this case a Strawberry version, to be on the thicker side and with more of the fruity flavour coming through. Not a bad attempt though. 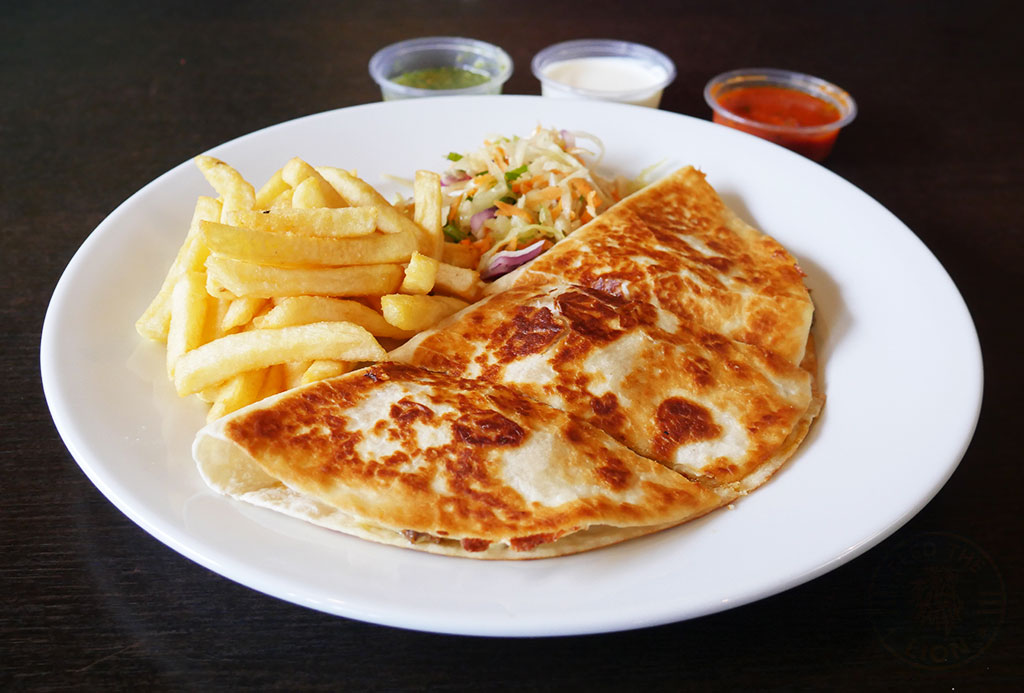 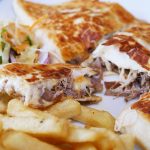 With four options to choose from, we opted for the Shredded Beef Quesadillas on account of the meat having been slow-cooked for a good 7-8 hours.

What’s not to like when tender shreds of beef are positively amalgamated with copious volumes of stringy and gooey cheese, in a beautifully grilled tortilla wrap?

Being served plump and piping hot, this we’d recommend all the way as a fantastic eat.

What’s more, the accompanying trio of sauces – Pica de Gallo, Sour Cream, Salsa Verde – added to the overall experience, with no one single bite being the same.

Truth be told, and given how heavy these quesadillas were, the sauces and the salad serving were more than sufficient in completing this dish.

We found the addition of the chips, which were of a standard variety anyway, to be somewhat superfluous.

A superb start so far; on to the Chicken Enchilada. 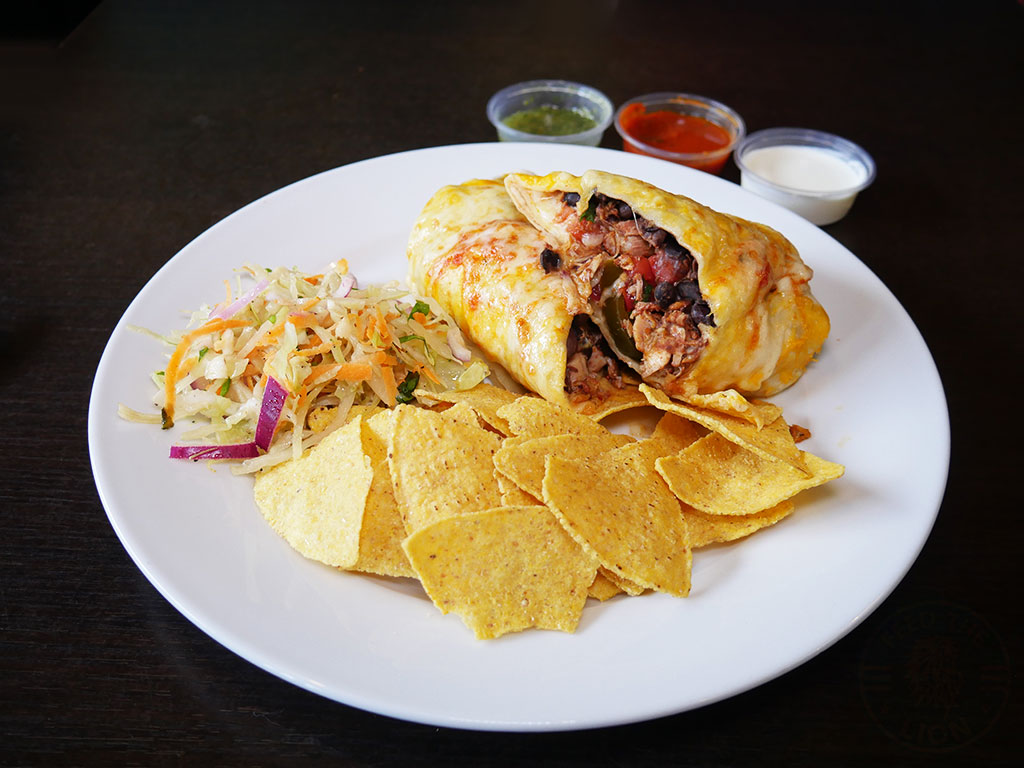 Before we start, let’s firstly put things into perspective by highlighting not just how big the above plate was, but that these Enchiladas were actually regular in size rather than large. Take our word, these Chicken Enchilada were packed as high as the ceiling above us.

Although slow-cooked, the chicken wasn’t as full-flavoured as the beef. And with the earthy goodness of the black beans coming through gently in the background, this wasn’t in the league of its beef counterpart.

Although the tortilla chips are meant to serve as textural contrast (we guess), they just seemed somewhat out of place here. Perhaps the salad too, though shredded, could have been spruced up with the addition of a dressing or something. 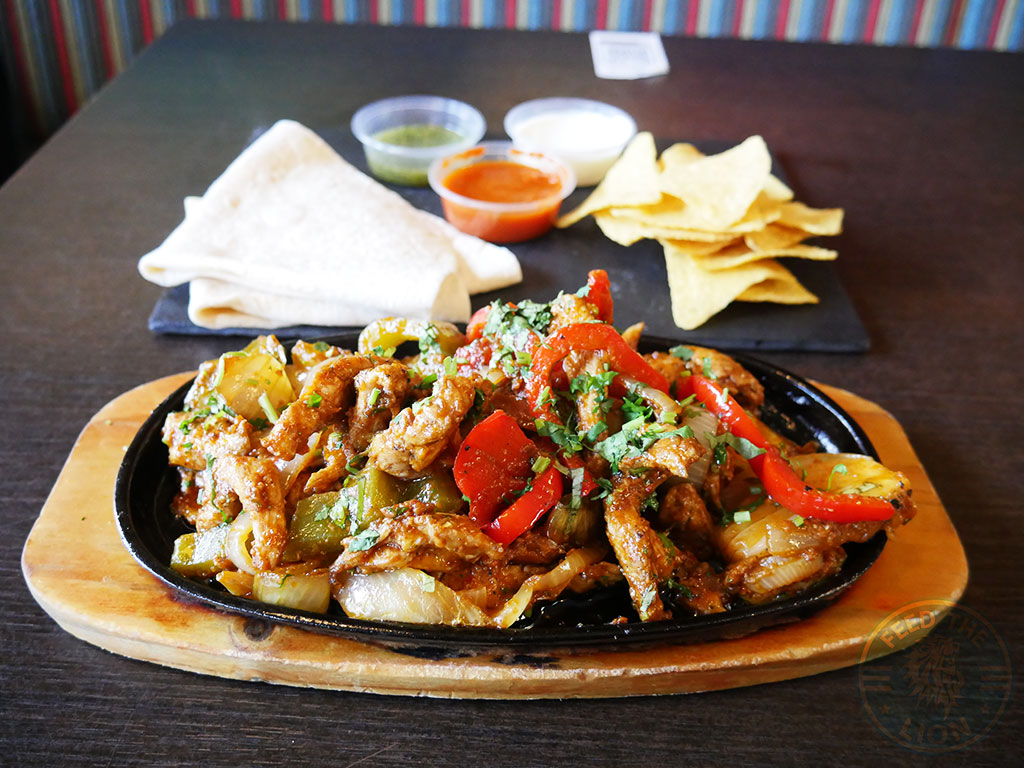 There’s something about the presentation of a sizzling platter, with all that spitting, spluttering, smoke and aroma, that gets one excited even before tucking in. 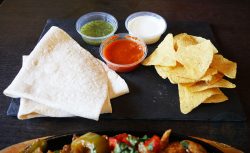 Build your own wrap… winner!

In this case, we absolutely loved the idea of this Chicken Fajita-for-two being presented with a pair of tortilla wraps, those trio of sauces, and some tortilla crisps, so as to allow the customer to build their own.

And what fun we had too combining the strips of chicken – enveloped as they were in the flavours of the caramelised onions and peppers, and which managed to retain that tender chewiness – with a few tortilla crisps to add some textural contrast.

Bear in mind that there’s only two wraps; so be sure to either fill them up the first time round, or enjoy the chicken au naturel with the dips thereafter. Either way, an absolute winner! 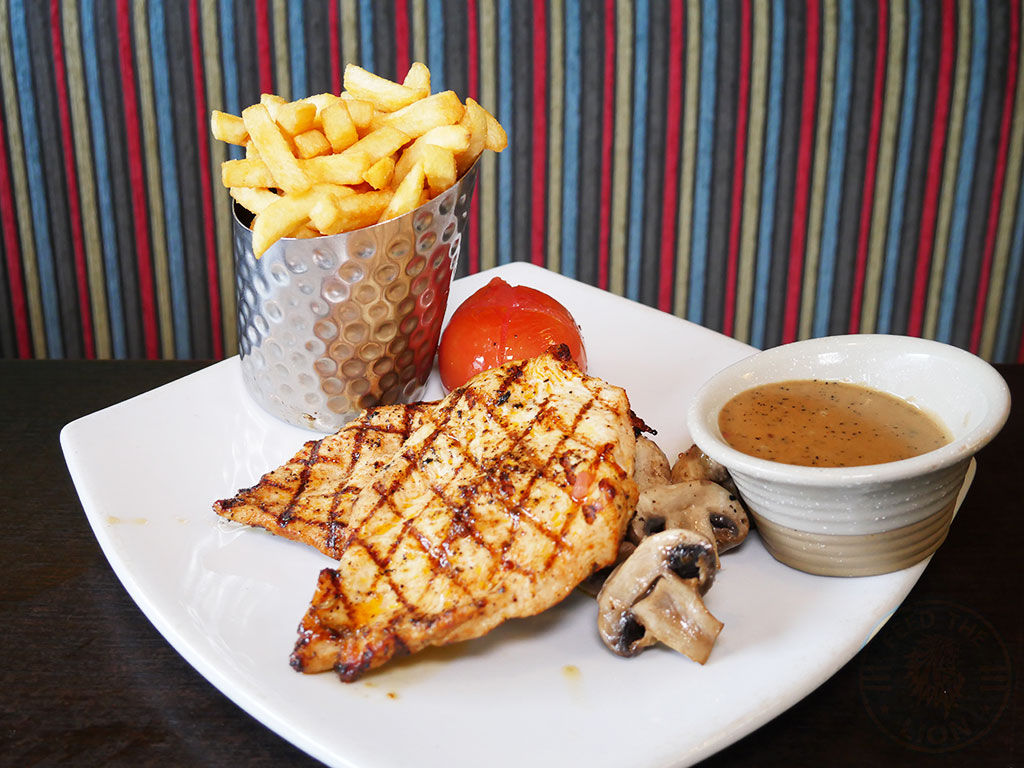 This was a tale of two halves, with an attractive pair of grilled chicken fillets, complete with some sexy griddle marks, cooked to a tee.

Turning out moist and tender, and lightly marinated in some aromatic spices, we couldn’t get enough of dumping the poultry in the silky smooth black pepper sauce accompaniment, which added just that right level of heat.

But, while the mushrooms were nicely sauteed in butter, the biggest oversight was the barely grilled tomato, that was eventually left uneaten. We would have ‘Recommended’ this, if not for that apparent flaw.

Having said that though, the portion of crispy chips were welcome on this occasion (though perhaps the alternative of wedges might be an option to mix things up). 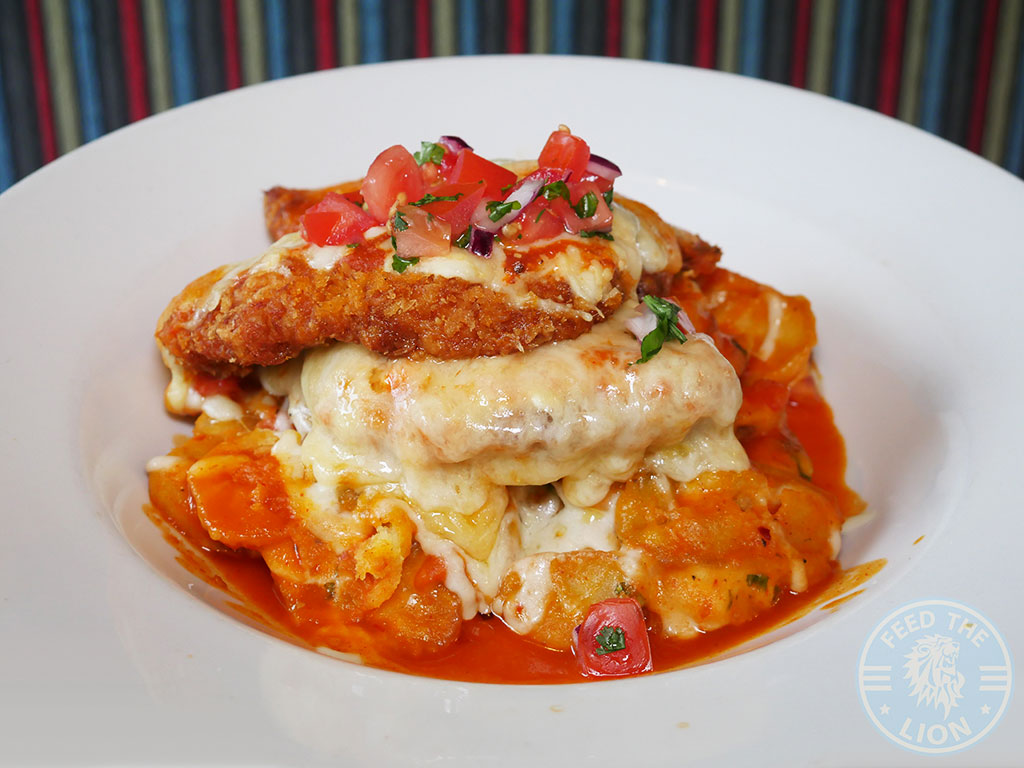 Being served in a deep bowl, with a smooth tomato sauce (presumably the salsa roja?!) at the bottom acting as a gravy, and everything stacked on top of the other, meant that there was a lot going on here. So much so in fact, that the fillet of breaded chicken wasn’t just resting on a bed of sliced potatoes, but in addition to the topping of grilled cheese, there was also plenty of cream cheese therein too.

What’s more, the dish needed some more seasoning. As you can imagine, it turned out to be a heavy plate of food (more of a meal for 2 if you’re a light eater). 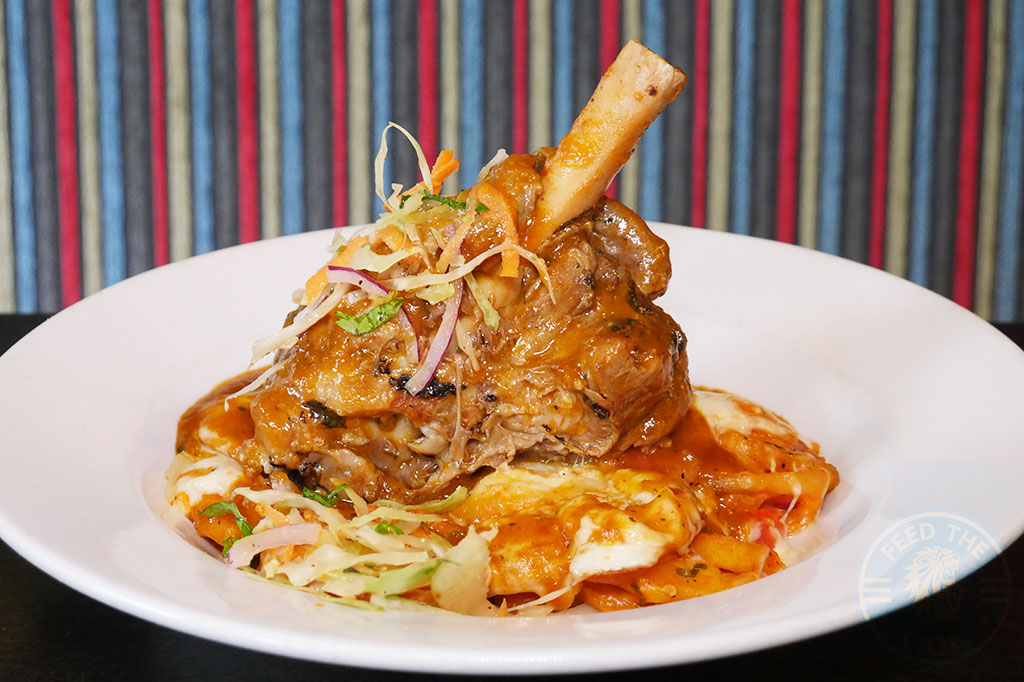 This was a tasty affair, with the slow-cooked and ultra tender lamb shank being paired with potatoes to deliver a hearty and wholesome plate.

With a return of the salad and plenty of delicious barbecue-flavoured sauce, this isn’t your typical shank. May be the addition of some acidity in the form of cherry tomatoes wouldn’t go amiss either.

Before beginning, you should note that all the desserts served by Amigos Mexican Kitchen, we were told, are homemade.

Sadly, the key ingredient in this Key Lime Pie barely materialised. Further still, the ratio of shortcrust base to cream cheese was out of sync. Pity, since the base was actually quite buttery and crumbly. 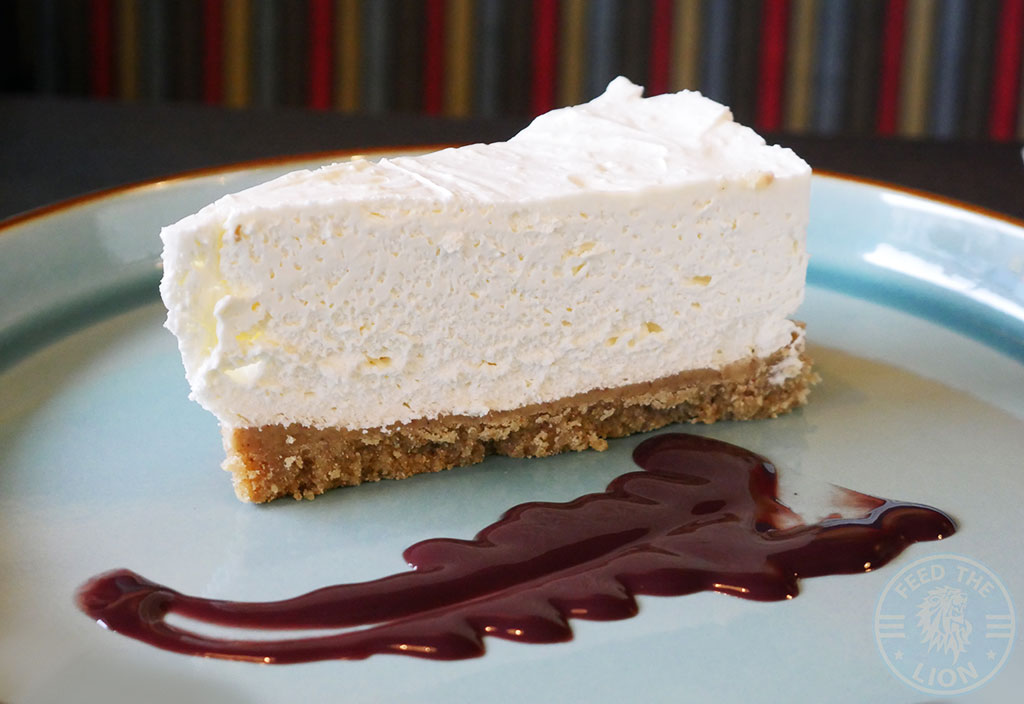 Not sure if this Vanilla Cheesecake would strictly classify as a cheesecake given how the top was more set cream than the velvety texture of cheese. Not much vanilla there either.

But, for what it was, this was light enough to satisfy our craving for something sweet. 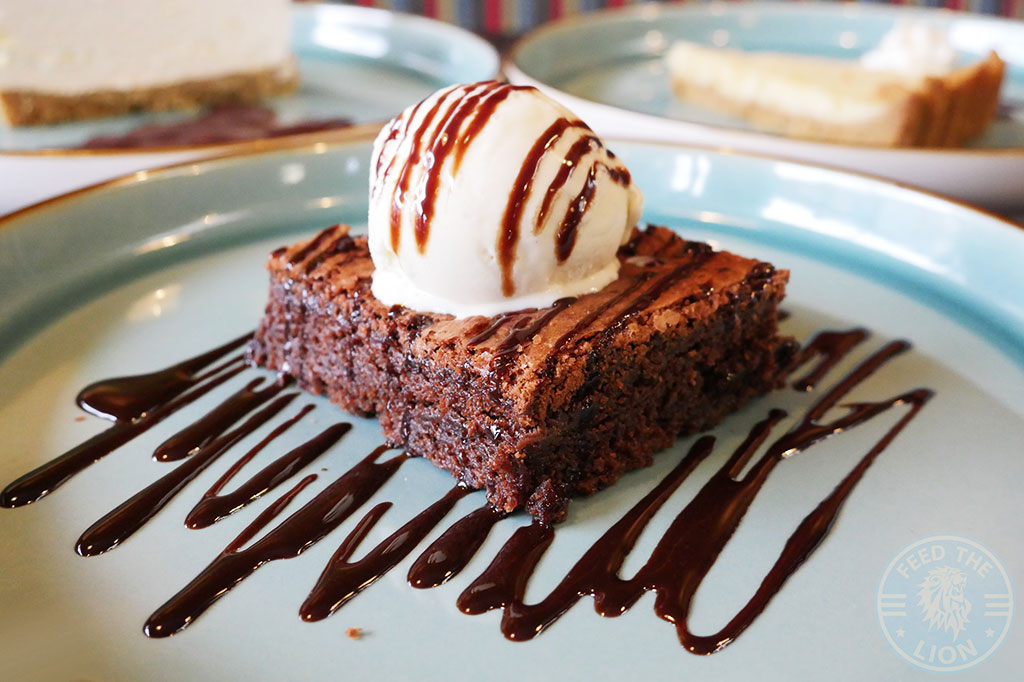 This Dark Chocolate Brownie, with a smooth and creamy dollop of vanilla ice cream on top, was our pick of the desserts.

However, since a brownie is supposed to offer that relatively dense texture interspersed with moments of decadent fudge-like gooeyness, we’d say this was more a dense cake than a brownie.

THE ROAR
Amigos
4 FTL's Roar
4.5 Pride's Roar (1 Roar)
Alcohol/ Pork?
FSA HYGIENE RATING
Last Checked: 10/09/2021
Facilities
Summary
There's certainly a reason why Amigos Mexican Kitchen in Sheffield has been going strong for a good decade now. And though we weren't entirely convinced by the authenticity of one or two dishes, there was no doubting the fact that a number of them were actually very tasty.

Amigos is a half hour's drive from the Peak District

To be sure though, of the few fully Halal Mexican restaurants we've reviewed, this is easily one of the better ones.

With a varied menu, there's something for everyone. Further more, if you're visiting the Peak District, then we'd thoroughly recommend driving an additional half hour to try the following recommended menu. 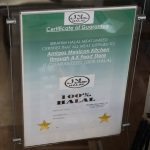 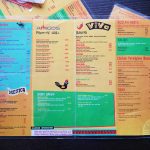 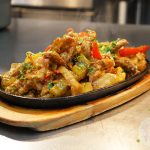 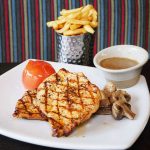 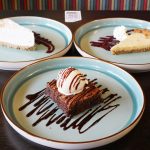 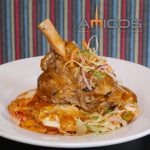