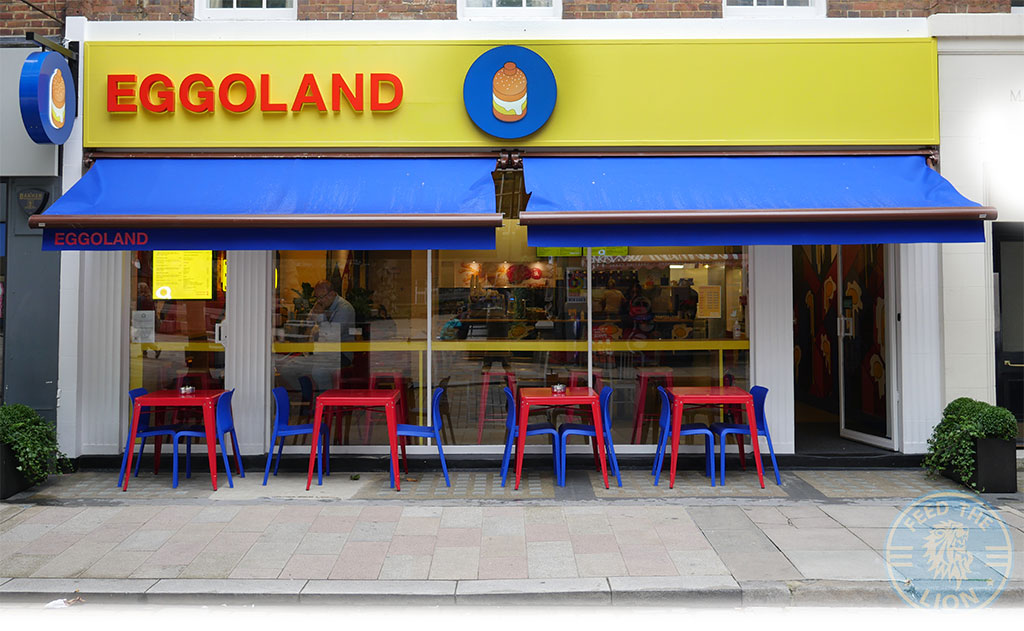 There aren’t many restaurants that are as blessed in receiving the type of national coverage Eggoland received prior to its opening in London’s Fitzrovia earlier this month.

After all, how many Halal eateries do you know of that have been featured in The Mirror, on ITV News and BBC Radio, as well as leading food publications like Catering Today and Big Hospitality?

While the attraction probably has something to do with the man behind the venture – professional boxer Sohail Ahmad and his inspiring life journey; nevertheless, Eggoland is, on sheer publicity alone, the hottest Halal restaurant to open so far this year. 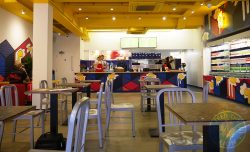 Not only did we have the pleasure of meeting the charming 33-year-old entrepreneur, who’s currently in the middle of a training camp in preparation for his next fight this September, but also got to hear of his incredible journey to the UK.

As a 12-year-old Afghan refugee, who was forced to leave his home and family in war-torn Afghanistan for a brighter future in the UK, Sohail arrived to the shores of Kent following an arduous journey in the back of a lorry. 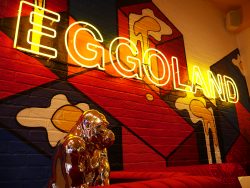 After being granted asylum, he eventually found himself taking up taekwondo to defend himself against bullying from kids at school, only to become British champion in 2006.

Two years later, he decided to take up amateur boxing before turning pro in 2015. Since then, the pugilist has fought 16 opponents, with an impressive record of 14 wins, one loss and one draw.

It was also during his early years that Sohail acquired a love for food after taking on part-time work washing dishes at a restaurant when he was just 13.

Of course, he hasn’t looked back since, with the launch of this 32-cover restaurant on Tottenham Street, whose theme, he says, ultimately stems from his love of eggs (think Rocky and pre-fight training). 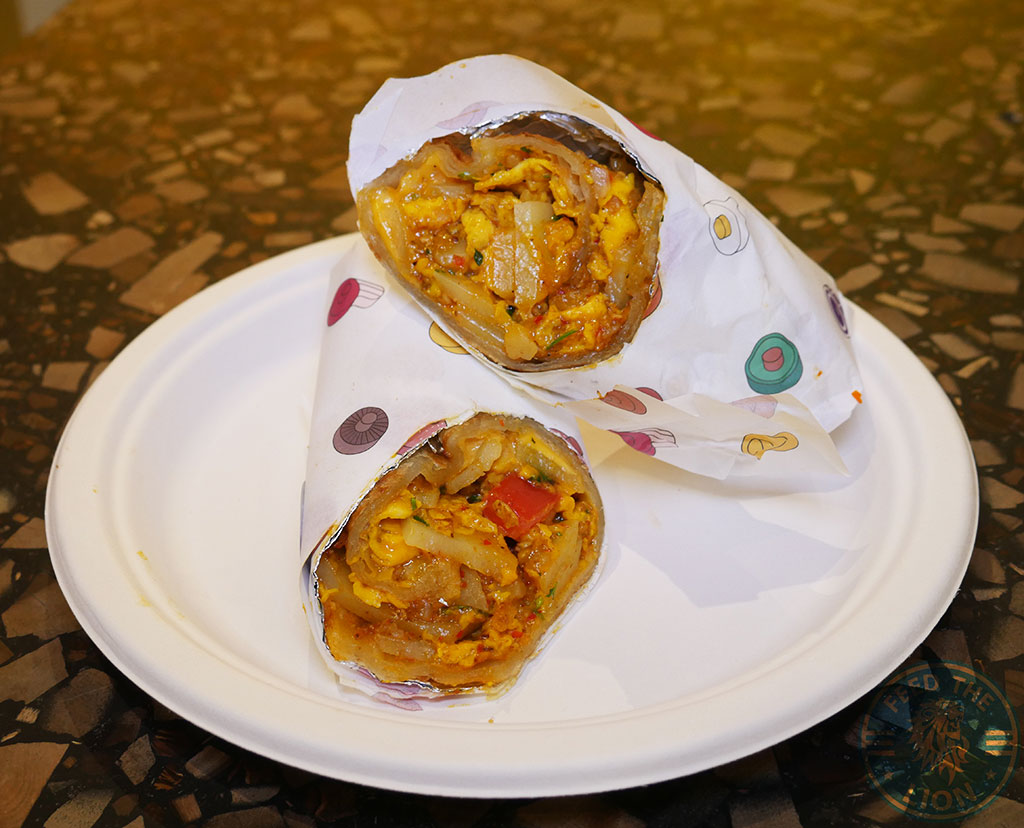 Jam-packed full of thin slices of potatoes, that retained enough of a bite to contrast against the creaminess of the scrambled egg, The Showstar was essentially a wrap rather than a bun, being the only item to come encased in a warm paratha.

With the harissa mayo assuring some heat that lingered pleasantly in the background, this was also the hottest choice on the menu. 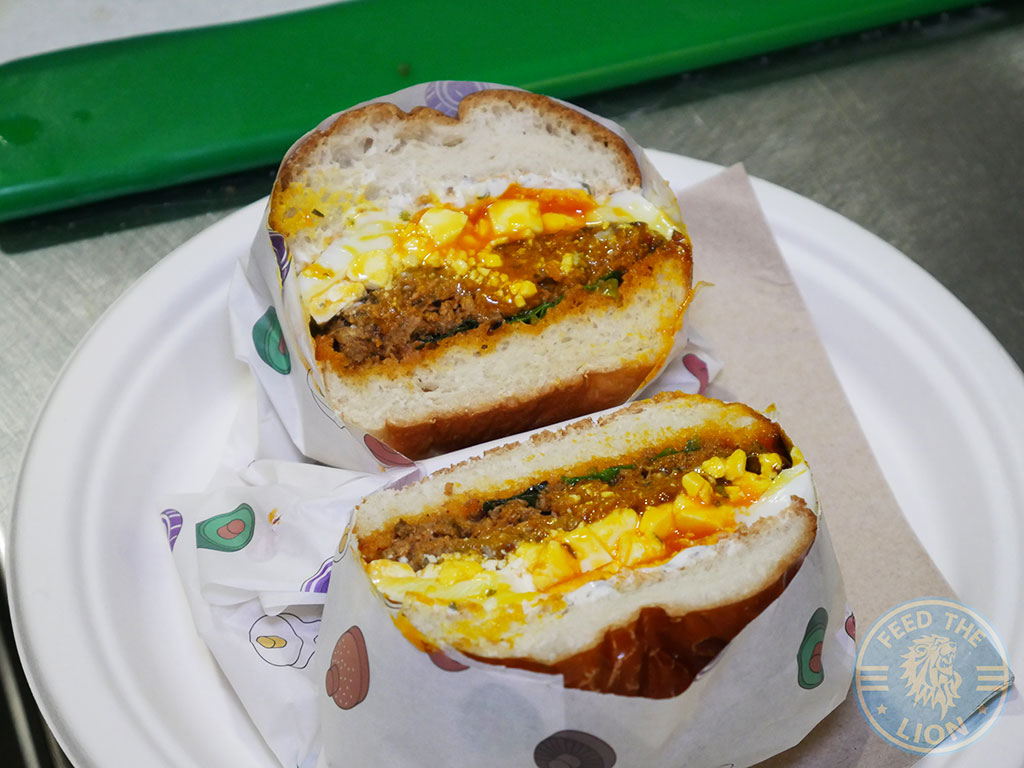 When Sohail told us that he and his team have worked extremely hard to source the best possible ingredients, including free-range Cornish eggs that are RSPCA-assured, he wasn’t joking. The fresh brioche buns used here are exceptionally good, being soft and fluffy, with a pillowy lightness, and showing off a shiny bronze top.

All this culminated in an Eastern Charm of epic proportions. Defined by an astoundingly tasty lamb patty, that wasn’t so much succulent as it was dreamily buttery in texture. Topped with what’s dubbed a “face-down” fried egg, which succeeded in lubricating everything beneath in the gooey richness of the yoke, this burger was unlike anything we’ve ever had before!

According to Head Chef Richard, Eggoland is, to the best of his knowledge, the only place that has the egg strategically flipped sunny-side down in a burger. Whether that’s true or not (of all the burgers we’ve had – and we’ve had our fair share – we can’t think of any), what’s certainly true is that it worked.

We couldn’t get enough of the light tanginess of the mint yoghurt, which eventually gave way to the earthy sweetness of that egg, with specks of pepperiness coming through courtesy of the harissa butter and mixed leaves. This is going to take some beating when it comes to our end of year #FtLion Awards ‘Best Burger’ category. 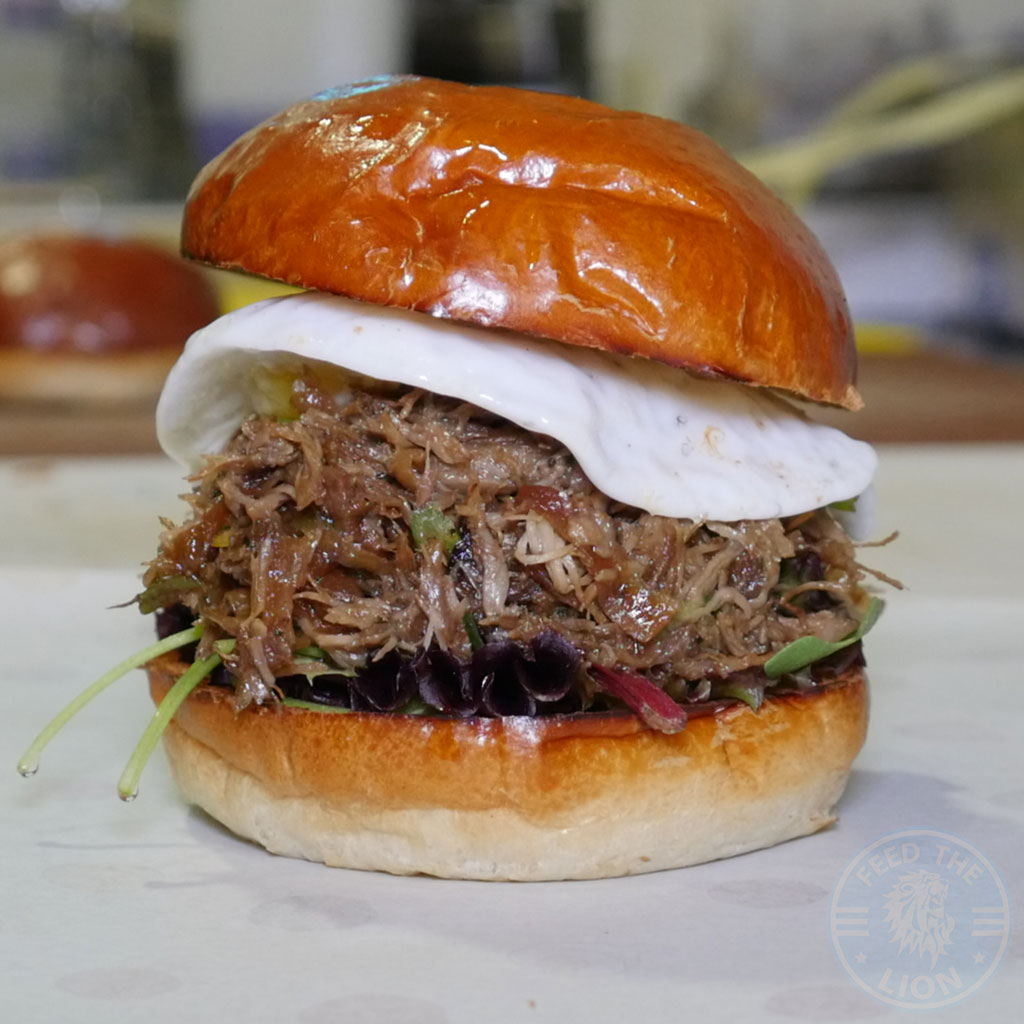 But then we came face to face with this thing of beauty: the Feeling Decadent duck burger. 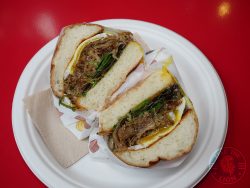 And how decadent it was too thanks to, again, a face-down egg; except that this time, it was a fried duck egg, which, although relatively the same size as a hen’s, actually offers a yoke that’s 1.5 times larger than its competitor.

As such, when that yokes deep, earthy richness was combined with the familiar umami-meatiness of the tender shredded confit duck, along side the sweetness of the caramelised onions, we were again confronted by another memorable sandwich.

Honestly, we would be hard-pressed in choosing a winner between this and the Eastern Charm had above. Another contender for our awards? Don’t bet against it. 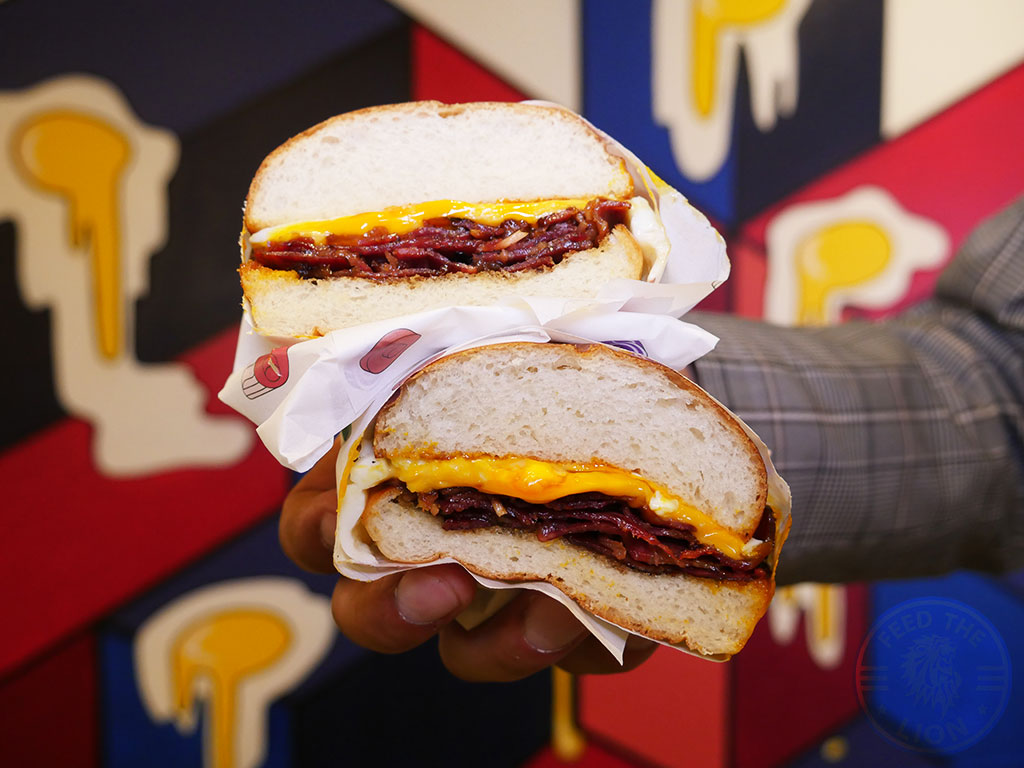 Having the cross-section of these burgers appetisingly presented in the way they were, with all the contents therein on full display, is certainly the way to go.

In the case of this Wakey Wakey Eggs’n’Baccy, while those attractive layers of aromatic beef bacon succeeded in imparting a satisfyingly strong sweet ‘n’ smoky flavour, they did, nevertheless, err on the chewy side, in spite of the gooey egg being cooked to perfection.

This was also easily the most contrastive of all the burgers had when it came to textures overall. 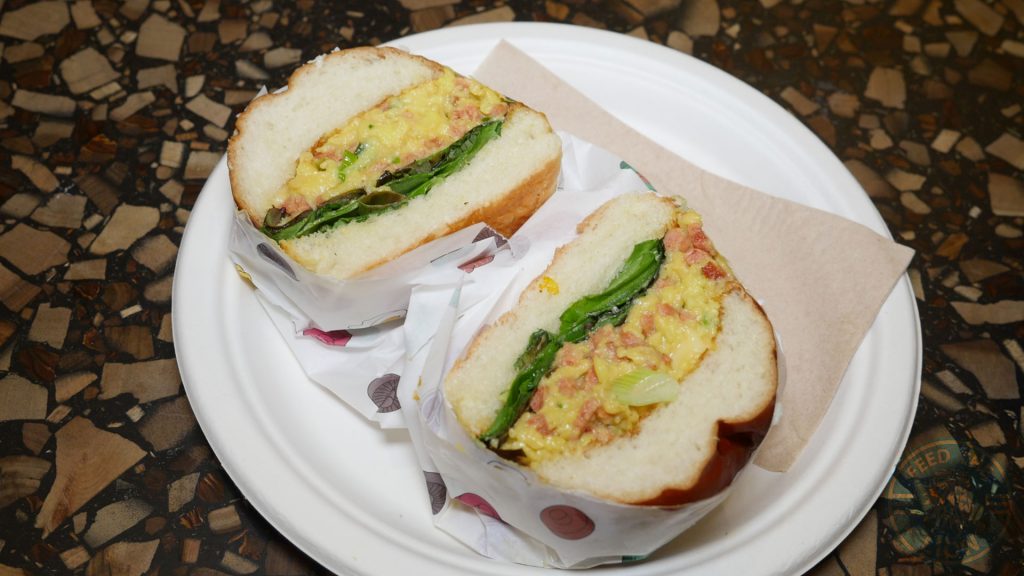 As for the Fakey Eggs’n’Baccy, then this was Eggoland’s vegan variation to the above Wakey Wakey Eggs’n’Baccy. And given our past experience of underwhelming vegan options offered by the vast majority of Halal restaurants reviewed, we weren’t holding out for much with this one.

You can imagine our utter surprise then, when we came away considering this almost comparable to its non-vegan rivals. Not only did the segments of sausage manage to deliver on that texture, but also that mild smokiness. More astoundingly still was the fake egg, which turned out to be ultra soft and apparently scrambled.

Truth be told, if we didn’t know this was vegan, we’d probably come away believing it was anything but. Granted this was a soft and squidgy affair; yet, it was definitely a tasty one. Worth a try if only for the unique experience! 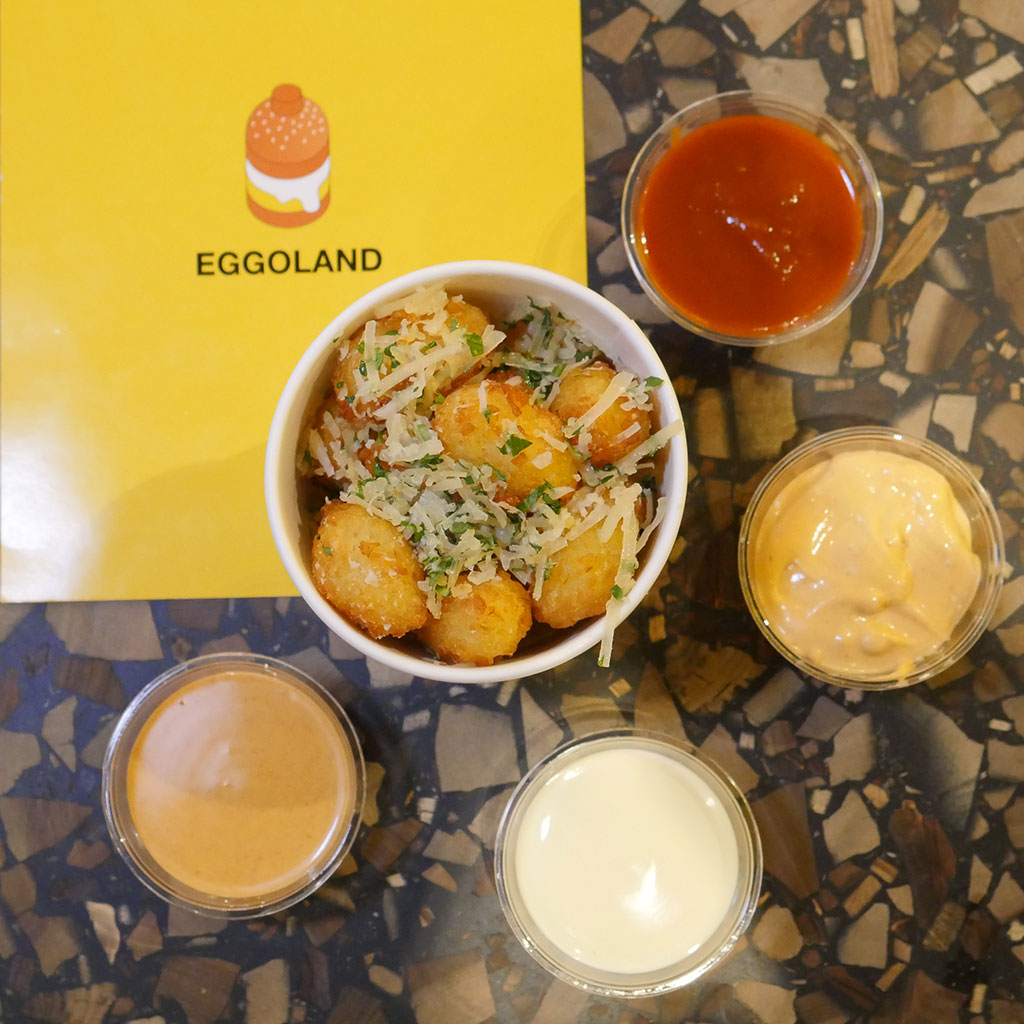 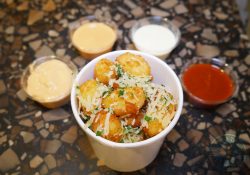 Having these made in an air fryer meant that not only were they crispy-cum-crunchy, but opting for the Parmesan & Truffle Oil topping meant piquantly heady hash browns that turned out to be incredibly addictive.

Additionally, we also tried all four of the inhouse sauces too. And how good they were, with the quirky named ‘4 Horseman Hot Sauce’, whose combination of four different chillis assured plenty of heat and a sweet undertone, turning out to be one of the most memorable sauces we’ve had in some time.

With the creamy and lemony Yuzu Mayo being our second favourite, the Harissa Mayo and the Chipotle Mayo weren’t far behind either. 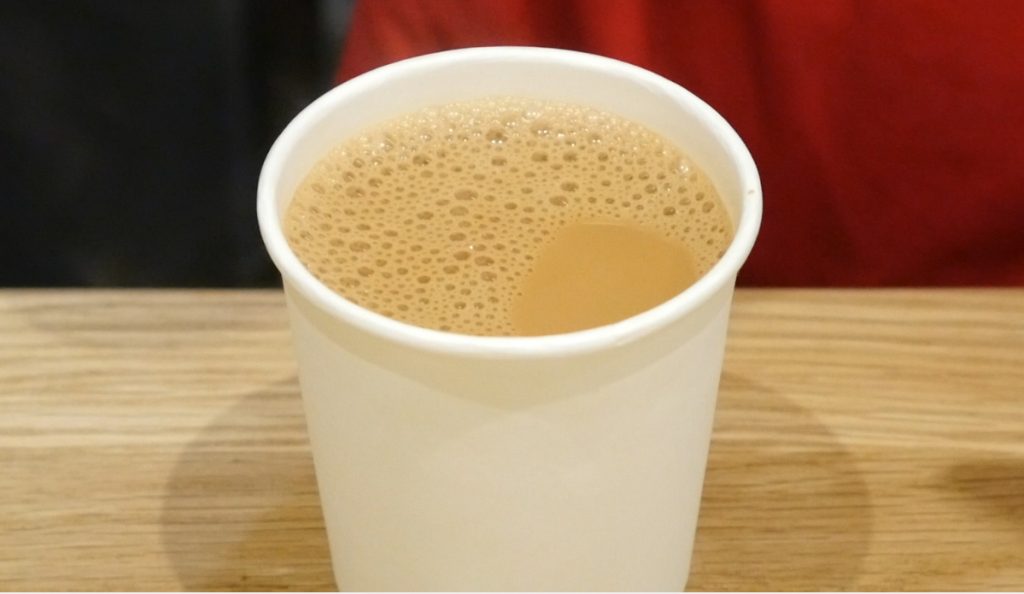 A soothingly creamy Karak Chai with the sweet aroma of the cardamom coming through well enough. Quite delicious.

THE ROAR
Eggoland
4.5 FTL's Roar
5 Pride's Roar (1 Roar)
Alcohol/ Pork?
FSA HYGIENE RATING
Last Checked: 19/08/2021
Facilities
Summary
Given the sheer breadth of publicity Eggoland has managed to garner since pro-boxer Sohail Ahmad announced its opening, would all that hype be able to live up to the billing? Well, as a matter of fact, it does, and in more ways than one.

While the menu is a small one (after all, you can only do so much with eggs, right?), it's obvious that plenty of thought has gone into what's been created here, with small, seemingly ingenious, ideas (like having the fried egg placed "face-down" to help properly lubricate things in the burger) evident of this fact.

More importantly, the food we got to enjoy was just knock-out (couldn't help the pun), with egg burgers so well made that two might just be in with a shout of being shortlisted for our end of year #FtLion Awards.

Most importantly though, here's your chance to enjoy an outstanding menu at one of the hottest Halal restaurant to open this year. We've teamed up with Eggoland to offer readers a massive 40% off a single meal deal (one bun, one side, and one dessert only) from Monday to Thursday, 1pm till 5pm, until 09 September 2021. 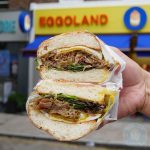 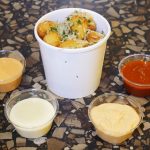 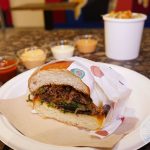 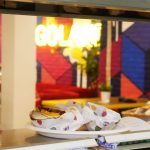 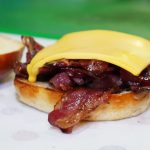 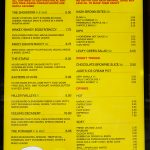 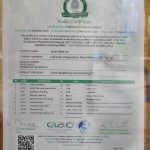 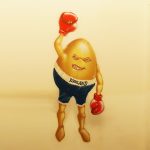 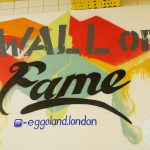 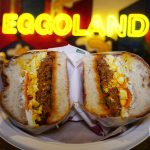