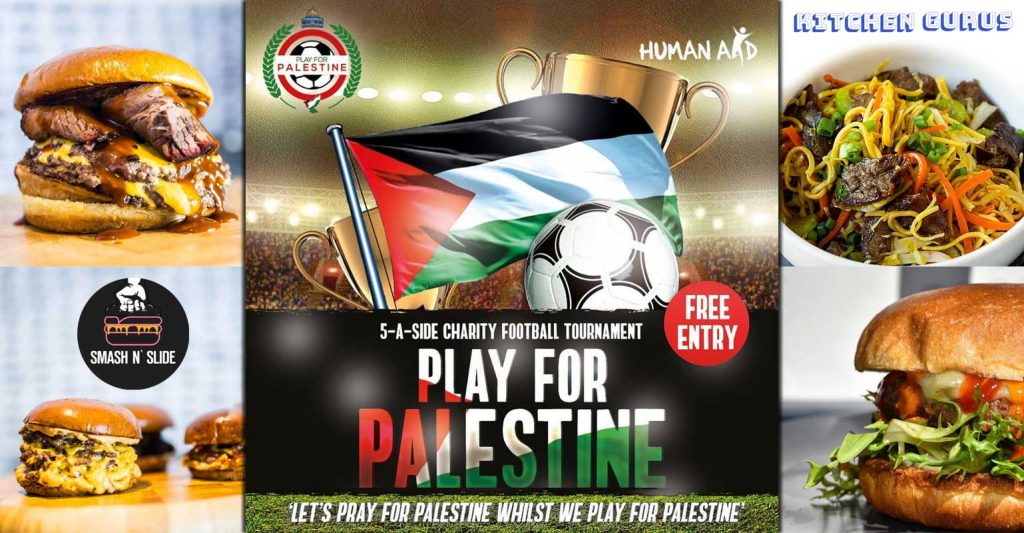 1.8 million Palestinians in Gaza are counting on your support for access to basic healthcare – Human Aid UK

A huge charity football tournament will be taking place tomorrow to help raise money for families in Palestine suffering under an Israeli-imposed siege.

Having teamed up with charity organisation Human Aid UK, the ‘Play for Palestine’ 5-a-side football competition will be kicking off at noon in London’s New Malden.

With a donation page having been setup on fundraising website Give Brite, the initiative has already raised almost £55,000 in just 13 days.

Going by a world cup format, the tournament will see 32 teams competing at Wimbledon Goals in Beverley Way (KT3 4PH) to reach the knock-out stage later in the day.

There will be plenty of delicious food too with participating Halal food outlets generously donating a large portion of their proceeds made on the day to Human Aid’s appeal.

Virtual kitchen Smash N’ Slide said: “We’ll be slingin’ our smash burgers at the PLAY FOR PALESTINE event. 50% of all our profit will be donated to the cause.”

While London-based Kitchen Gurus will be serving a selection of gourmet burgers such as their Signature Lamb Burger, Philly Cheese Steak, and 24-hour marinated Masala Chops.

Hospitals in the Gaza strip have been stretched beyond capacity. Medicine is in short supply, together with inadequate equipment, shortage of fuel and electricity.

The funds raised by Human Aid will help support of the emergency ward at Al-Shifa hospital in Gaza which serves over 13,000 patients every month.

“1.8 million Palestinians in Gaza are counting on your support for access to basic healthcare. Hospitals in the Gaza strip have been stretched beyond capacity. Medicine is in short supply, together with inadequate equipment, shortage of fuel and electricity,” Human Aid said.

With 80% of people in Gaza depending on aid to survive, the charity revealed that while 50% of ambulances there have stopped working, around 25% of essential medicines and 52% of medical disposables have “completely run out”.

Donations can be made securely via the following link: https://givebrite.com/play-for-palestine.