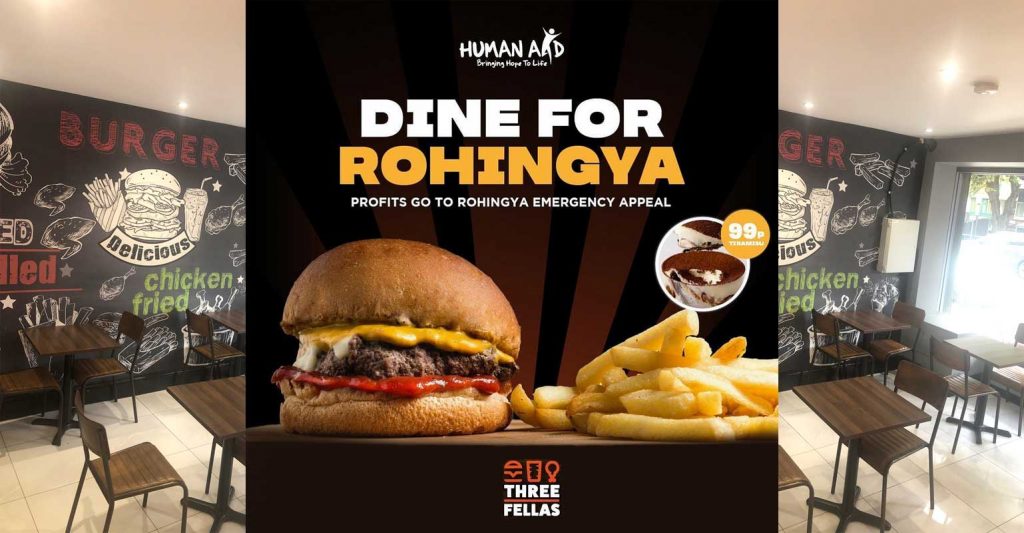 Three Fellas in London’s Camden Town will be donating all proceeds to the Rohingya emergency appeal on Saturday 14 August.

Having teamed up with charity organisation Human Aid, the fully Halal restaurant’s ‘Dine4Rohingya’ campaign will kick-off at noon tomorrow on 25a Pratt Street.

The collaboration will also be aiming to raise an additional £500 through a secure donation page setup on the fundraising platform Give Brite.

The newly launched eatery said on Instagram: “Our Saturday 14th Aug 2021 Charity Collab with @humanaiduk get behind the cause. https://givebrite.com/c/humanaid/three-fellas All Profits on the day will go towards the Emergency Rohyngia Appeal [sic].”

Human Aid has said that its “team on the ground are providing immediate emergency relief to Rohingya families who have lost everything” after torrential rain over the past few days saw severe flooding and landslides devastate Kutupalong refugee camp.

“The Rohingya need your help now,” the charity group declared, adding: “At least six Rohingya refugees were killed by landslides or drowned in flooding after rain inundated refugee camps in Bangladesh over recent days, deepening the despair among those living there.

“Knee-deep waters coursed through the camps, battering fragile shelters made of bamboo and tarpaulin and making at least 5,000 people homeless.”

In 2017, Kutupalong refugee camp “became the world’s largest refugee camp for the 700,000 Rohingya escaping military massacres in Myanmar, called ‘genocidal’ by the UN”

Halal food at 'Play for Pales...