Anyone who has ever been knows that Westfield has plenty of food options, with an entire court dedicated to restaurants offering cuisines from around the world.

Heck, we even published a compilation of Halal and Halal-friendly restaurants there, which actually included this fine looking Lebanese eatery, Mandaloun, which opened in 2010.

Describing its food as “nouvelle vague” – a French term meaning “new wave” or “a new movement in a particular field”, the menu is said to be “melting pot” of traditions with an “attachment to modernity”.

Expect to find food like mezze, couscous, stews and shawarmas, alongside grills and fish dishes – all served in an elegantly casual dining room whose dark, earthy colour scheme helps to create a pleasantly relaxed atmosphere.

Although Mandaloun’s food menu is fully Halal, there is an alcohol bar located on one side of the premises.

And while there’s plenty of seating available outdoors, the restaurant also serves shisha here, making it not particularly family-friendly. If you haven’t heard of a Jellab, or jallab, then it’s a Middle Eastern beverage that’s quite popular across Lebanon, Jordan, Syria and Palestine. Although made from a variety of syrups, this one is date-based with a good sprinkling of pine nuts. As such, expect a sugary sweet concoction, and a unique one at that if you’ve never had anything like before. Certainly worth it if you haven’t; but not one that you’d want often given its sugary content.

As for the fresh Lemonade, then of the four elements, then the mint cane through meekly. A refreshing one nonetheless. 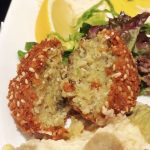 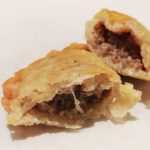 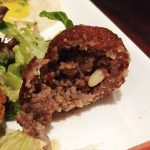 We found the kebbeh to be the weakest of the bunch, with the meat turning out dry and lacking in taste.

And though the falafal could have been slightly less crunchier in texture, the selection of pastries were varied in terms of their filings, which was good.

All in all, this was a good Mixed Mezze which was accompanied by standard bread, at best. A rather unexceptional dish which, although decent enough, certainly wasn’t worth the £15 price tag!

The flavour profile’s in this Kharouf Mehche & Riz were simple enough, with the slow cooked meat turning nice and tender.

The watery sauce was subtly flavoured and the sprinkling pine nuts over the top didn’t bring much to this plate other than textural contrast. Coming to a Lebanese place and ordering some kind of grilled meat dish will always be on the card.

In this case, it was their Mixed Grill which, much to our surprise and frustration, came with a side of plain white rice (not mentioned on the menu), which made our ordering of chips seem unnecessary.

In any case, the quality of the decent-sized chunks of meats turned out okay, with the smaller cuts of lamb turning out well done, the chicken being a touch bland, and the kafta kebab being your good, standard variety.

It has to be said though, that you will need the sauces to add some much needed flavour. Ubiquitous French Fries that were well cooked and presented crispy on the outside, while being soft and fluffy on the in.

THE ROAR
Mandaloun
3 FTL's Roar
2.5 Pride's Roar (1 Roar)
Alcohol/ Pork?
FSA HYGIENE RATING
Last Checked: 18/01/2020
Facilities
Summary
Given their locale and, it has to be said, their impressive setup, we weren't expecting the food to be so average.

The menu was simple enough, with the presentation of the dishes received indicating that the chef wasn't burdened by niceties like presentation, and the restaurant unconcerned with presenting quality, freshly-made bread and not the cheap version they brought out. And given the price range, we also weren't impressed with the portion sizes either.

While this might sound more critical than we usually might be, it's only because there's better places to enjoy Lebanese cuisine for far less, albeit in not so fancy surroundings.

And while Mandaloun may not be a place to make that special journey, if you are in the area, then it's a decent option.
FOOD
PRICE
ATMOSPHERE
SERVICE
What people say... Leave us your Roar below...
Sort by: