History of The Shahi Nan Kabab in Southall & the controversy

Those of you who enjoy chargrilled Pakistani kababs and consider yourselves Halal foodies will certainly know of legendary fast food restaurant The Shahi Nan Kabab. 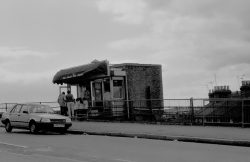 There’s no doubt that, given its history, this brand is as important a part of London’s Halal hospitality scene as any other that’s been around for over 50 years and still going strong.

Who cared of aesthetics and hygiene standards when convenient parking under the bridge meant being able to order naan-pockets, crammed full of pipingly hot grilled kababs and drenched in that famous hot chilli sauce, to enjoy on a cold winter’s evening.

In fact, it was so well received that a second immediately followed in 1970, with Afzal opening a site on 59 High Street next door to Southall Police Station (reviewed by FtLion in 2014).

But, it wasn’t until 1985 that a third was launched opposite on 56 High Street, this time by Mohammed, in place of a brief but failed attempt at a fish and chips joint.

A year later, while Afzal managed to open a tiny takeaway in the very heart of Southall Broadway on 88E Northcote Avenue, his long-standing store beside the Old Bill eventually ran its course and was forced to close 49 years later in 2019.

TIMELINE: The History of The Shahi Nan Kabab

It was during this time too that the family made the critical decision, and one that would come to haunt them later on down the line, of not so much franchising the business as “selling the name on” – a mistake that Mohammed’s son, Shekio Aslam, admits was a “huge blunder”.

Not only would this lead to other branches being opened elsewhere, including joints in London’s Tooting and Wembley, which eventually closed down, but also one in Birmingham’s Stratford Road, whose shares were later sold by Shekio’s family some 11 years ago.

In 1996, Mohammed likewise sold his High Street venue (today next door to Lidl) to the late Mr Abdul Hamid Malik, who subsequently handed the reigns over to his son Farukh Hamid.

Meanwhile in 2005, Mohammed decided on launching a new concept called Shahi Nan Buffet on 88 High Street, only to find that an insatiable appetite for his famous kababs adversely affected the business to the point that it was forced to close five years later.

Sadly, time also caught up with the original branch, with the place being completely demolished in 2017 during major expansion work on the bridge.

While it was the end of an era for the iconic eatery affectionately known as the “Bridge Walleh” (a sobriquet that’s also used on their 88 High Street Just Eat page), it wasn’t the end of the road for Shekio.

Having now taken over the business from his father, he managed to secure a site a year earlier, and that too barely a stone’s throw away on 108 South Road.

But things didn’t work out for the young entrepreneur, as high rent, along with the unique financial difficulties brought on by the sudden onset of Covid, conspired against him.

Consequently, he was forced to relocate in 2020, ironically, back to the same branch of 88 High Street and opposite the very same police station his uncle Afzal setup shop beside all those years ago. 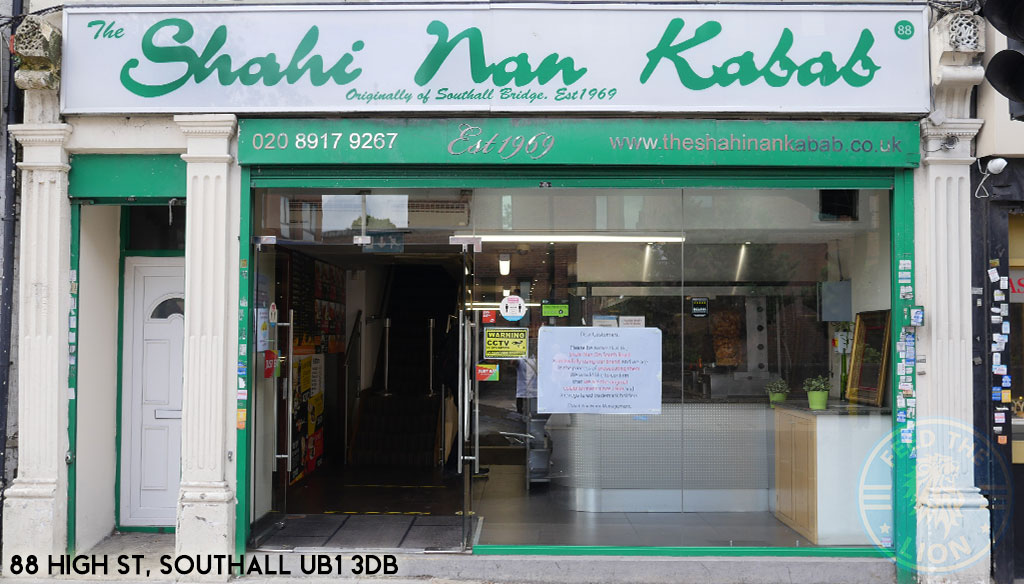 As for the premises left behind on South Road, then according to Shekio, that was acquired by an ex-Shahi Nan Kabab employee, who continued to unapologetically serve the brand’s famous kababs and chutney, despite having converted the shop into Chixy’s Grill. 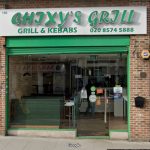 All this was tolerated by Shekio until very recently, when, around seven weeks ago, he learned that Chixy’s had changed its name back to Shahi Naan Kebab, albeit a subtle variation on the original (incorporated as a private limited very recently on 20 April 2021).

“My father has worked really hard for 50 years. He’s 83-years-old. He still comes to the shop and he still puts kebabs on. He is Shahi Nan Kabab and he’s the one that’s done all this,” Shekio told FtLion.

“He’s been in Pakistan for three months now. He doesn’t know what’s going on here and I don’t want him to know. I want to clear the air before he comes back. 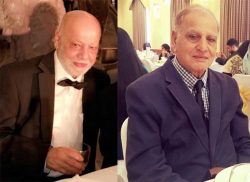 “But he’s got a lot of eemaan (faith in God) and he’s a praying man; so it won’t disturb him that much. But it’s disturbing to me, because he worked so hard for this. For someone to come on that road near that bridge – it’s unbearable,” he declared.

Having already acquired ‘The Shahi Nan Kabab’ as a standard trade mark in 2008 for two decades, Shekio took the first steps last month in seeking to secure his father’s legacy, and legally protecting all his hardwork, by issuing a legal letter against Shahi Naan Kebab’s use of said name.

In the hopes of answering the incessant queries over which branch is directly related to the ‘Bridge Walle’, he also put up a notice on his shop front window that read: “Dear Customers, Please be aware that the Shahi Nan On South Road is unlawfully using our brand and we are in the process of prosecuting them.

“We would like to confirm that we are the original establishment since 1969 and are registered trademark holders.” 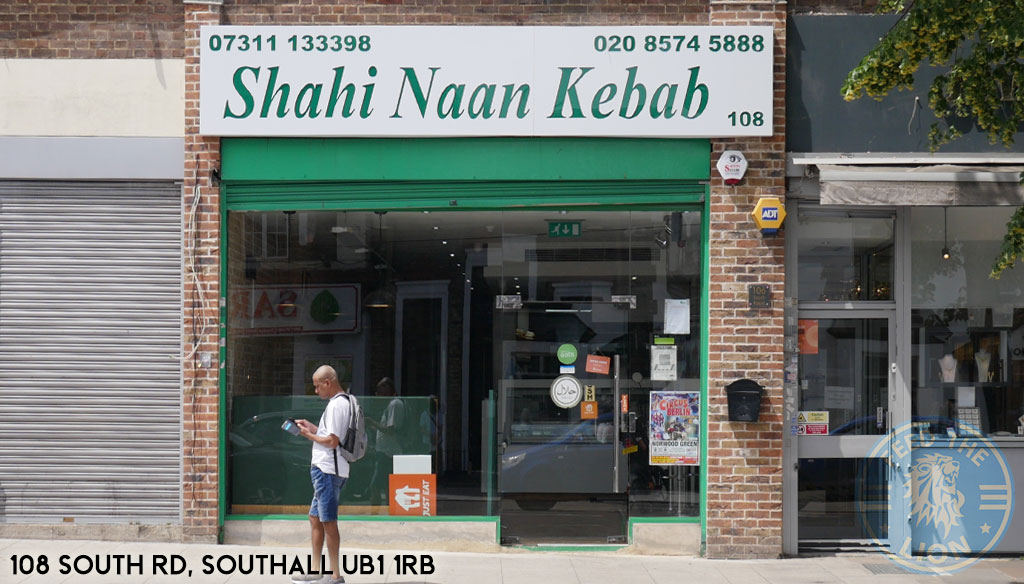 I’m going all the way. We’re gonna spend what needs to be spent. I’m gonna make sure I see him in court – Shekio Aslam says of Shahi Naan Kebab’s owner

But Shahi Naan Kebab’s manager, Abdul Wahid, who claims to have worked at the site on 56 High Street for 16 years, gave short shrift to facing threats of legal action.

“Everything is proved and this is a registered company. I have registered [it]. I have the proof [that] this is registered,” he said, before insisting: “This is the original from long, long time. Before [we] were on the bridge and now we’ve come here. And [it is the] same recipe [sic].” 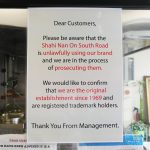 While he also maintained that his shop sourced HMC certified meat, Abdul Wahid even went so far as to cast aspersions on the Halal status of his rivals by alleging that they “don’t care about Halal-Haram [sic]”.

“If someone told you [that] this is not the original one, this is the fake one; [but] if you eat the food, then you [will] say yourself which is [the] original one and which one is the fake one. I don’t recommend anyone, just this own shop [sic],” he said.

Although The Shahi Nan Kabab’s owner, Farukh, confirmed that Abdul Wahid had indeed worked for them, albeit “on and off” for 12 years as opposed to 16, he dismissed his ex-employee’s assertions as baseless.

“How would he or anyone know where we get our meat from? Our meat is 100% Halal,” he responded, adding: “He doesn’t know about our recipes, as we prepare our food at home,” before clarifying: “Otherwise he has no connection with us or Shahi Nan Kabab.” 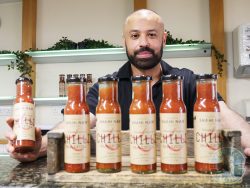 Shekio too rejected the accusations: “I can show you my [Halal] certificate and my supplier’s name right now. … So we can clear all the doubts. If they want to go down that road – there’s no other roads to go down for them – so they’re taking the Halal side now, which is ridiculous.”

As for the future, then Shekio says he is looking forward to his day in court and the chance to finally “clear the name [and] to clear the confusion”.

With Shahi Naan Kebab having said to have failed in responding to the initial legal letter sent, Shekio says he will now be taking further action that will include the seeking of compensation.

“I’m going all the way. We’re gonna spend what needs to be spent. I’m gonna make sure I see him [Shahi Naan Kebab’s owner] in court,” he said.

As for Shahi Naan Kebab’s owner, Muhammad Usman Riaz, then despite numerous attempts, FtLion was unable to reach him for a response.