Those on the lookout for fresh and authentic street food in central London need not look past The Market on Soho’s Berwick Street.

Open Monday to Saturday between 8am and 6pm, this vibrant market is said to be “one of London’s oldest markets dating back to 1778”.

The Market is made-up of a number of food stalls which include Middle Eastern falafel wrap stands and Uzbek food inspired by the flavours of the Silk Road, to African, Caribbean, Spanish and Indian cuisines.

What we’ve done is make your life that little bit more difficult by sifting the Halal from the non-Halal and discovering a surprisingly large number of choices.

As for those in the area seeking to fulfil their prayers, or just looking for some quiet solace from the hustle and bustle, then there’s the Islamic Centre Soho just around the corner on Berwick Street which, provided you’re male (this is a men-only mosque), you can visit. La Cocina Divina, or The Divine Kitchen as it’s rendered by the ever-reliable Google Translate, is a fully Halal Spanish stall that specialises in paella, filled churros and patatas bravas.

Operating from between 11.30am till and 2.30pm, they also have loyalty cards which offer diners a free meal on their 10th visit. If you’re after a quick bite that’s Indian and fully Halal, then it has to be Quick Bites, which, aside from the regular tikka curries, selection of kebabs, and samosa sides, also serve biryani specials which is quite impressive. Another Indian trader, though one with a far more humble setup than the above, is this vendor-with-no-name (or is it Delicious Food?!).

In any case, it’s fully Halal with eight dishes to choose from, which includes, surprisingly, a North-East Indian dish Lamb Dumpling. KMY’s Kitchen serves fully Halal African & Caribbean food such as Boneless Jerk Chicken, of course, as well as Peppered Steak and Goat Curry, with all meals coming with salad and rice. Wowshee is a vegan, Halal and veggie Egyptian Falafel Bar, or as falafel is known in Egypt, ‘Tameya’, which means taste or tasty.

The food stall operate Monday to Friday between the hours of 11am to 2.30pm. Lime Hut promises the “taste of sunshine” every Thursday and Friday only, as it dishes up modern Caribbean food that’s also fully Halal.

The idea is to choose your base, e.g. Rasta Wrap or Boom Box with rice, followed by a topping, such as chicken, jerk halloumi or vegan bean, along with extras and a sauce. Jerusalem Falafel is a fully vegan stall with wraps that start from £4.00 and boxes for £5.00.

Operating Monday to Friday from 10am to 4pm and established in 2011, its falafels are said to be made from “a combination of more than 20 kinds of vegetables, herbs and spices”. 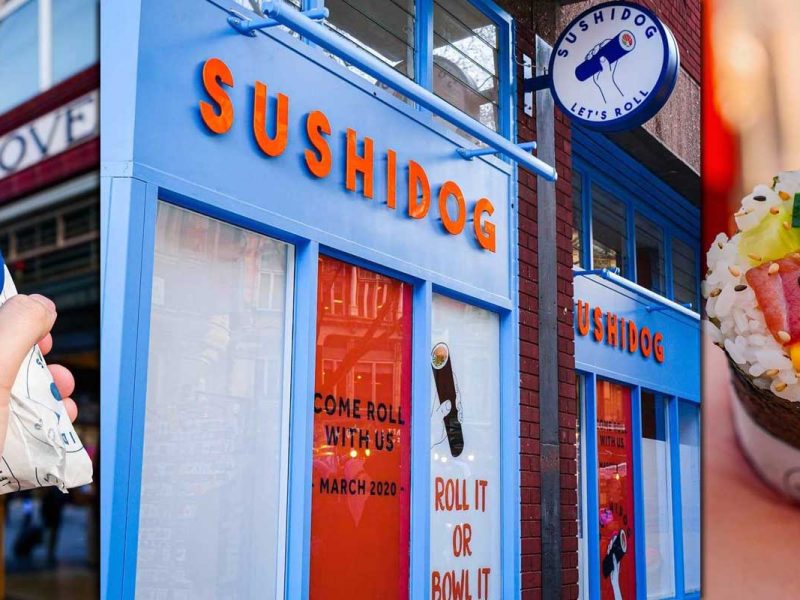 SushiDog to launch second in S...