#FtLionAwards 2021 Main of the Year shortlist

After the #FtLionAwards 2021 Best Starter of the Year (proudly sponsored by the hugely impressive, family-run restaurant in east London’s Forest Gate, Kicthen 37), we continue with Best Main of the Year. 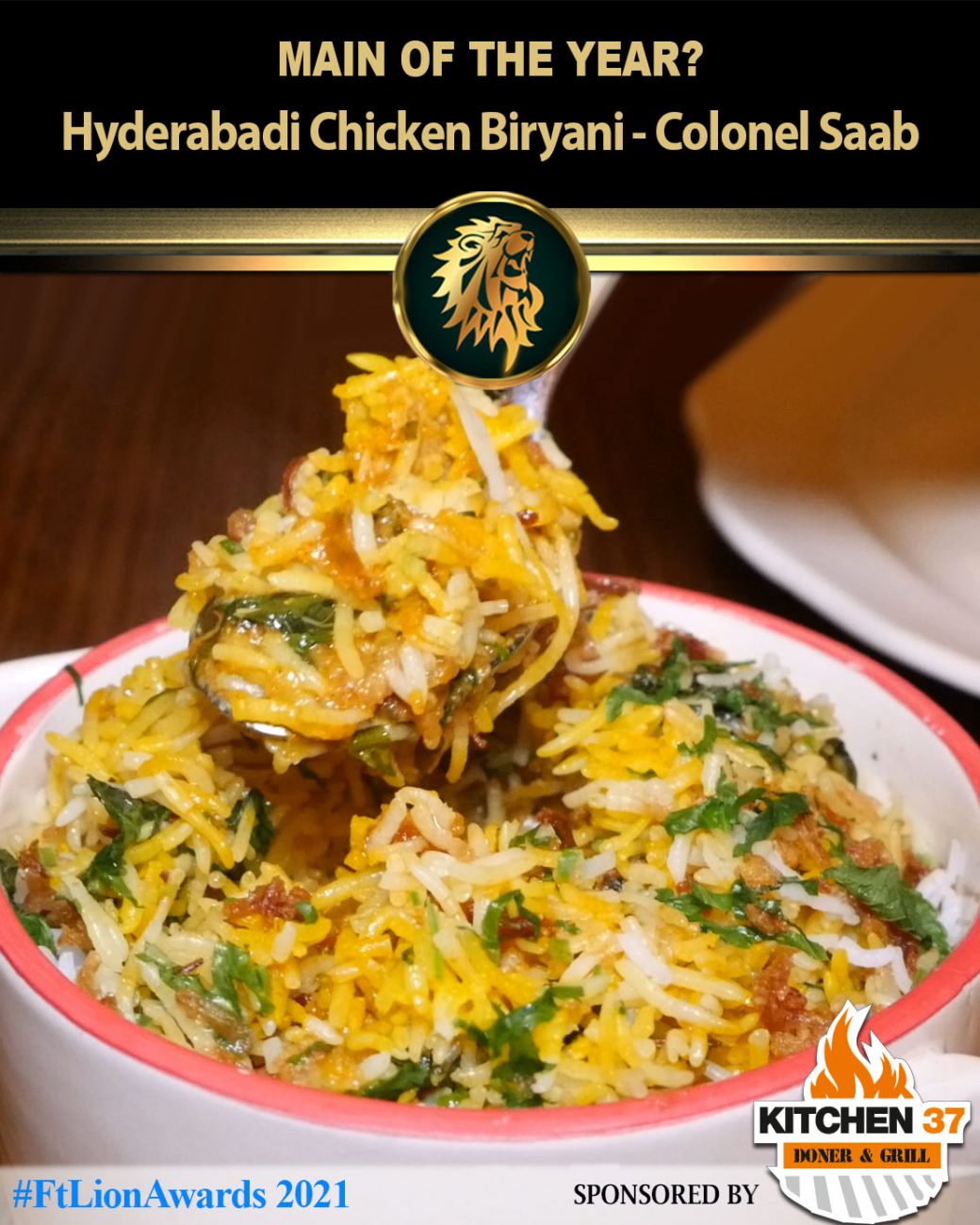 Colonel Saab in London’s Holborn which was the second restaurant this year to be rated a perfect 5/5, and also has a beverage up for an award, presented us this Hyderabadi Chicken Biryani which, at the time, we asked whether it was “the best chicken biryani we’ve EVER reviewed?”

It’s secret? The combination of spices and sundry here were so masterfully balanced, that not only did we experience spicious waves of ecstatic pleasure with every given bite, but the harmony of flavours was unlike anything we’d had anywhere else before. And it was this balance and harmonisation that made for such an unforgettably memorable biryani. 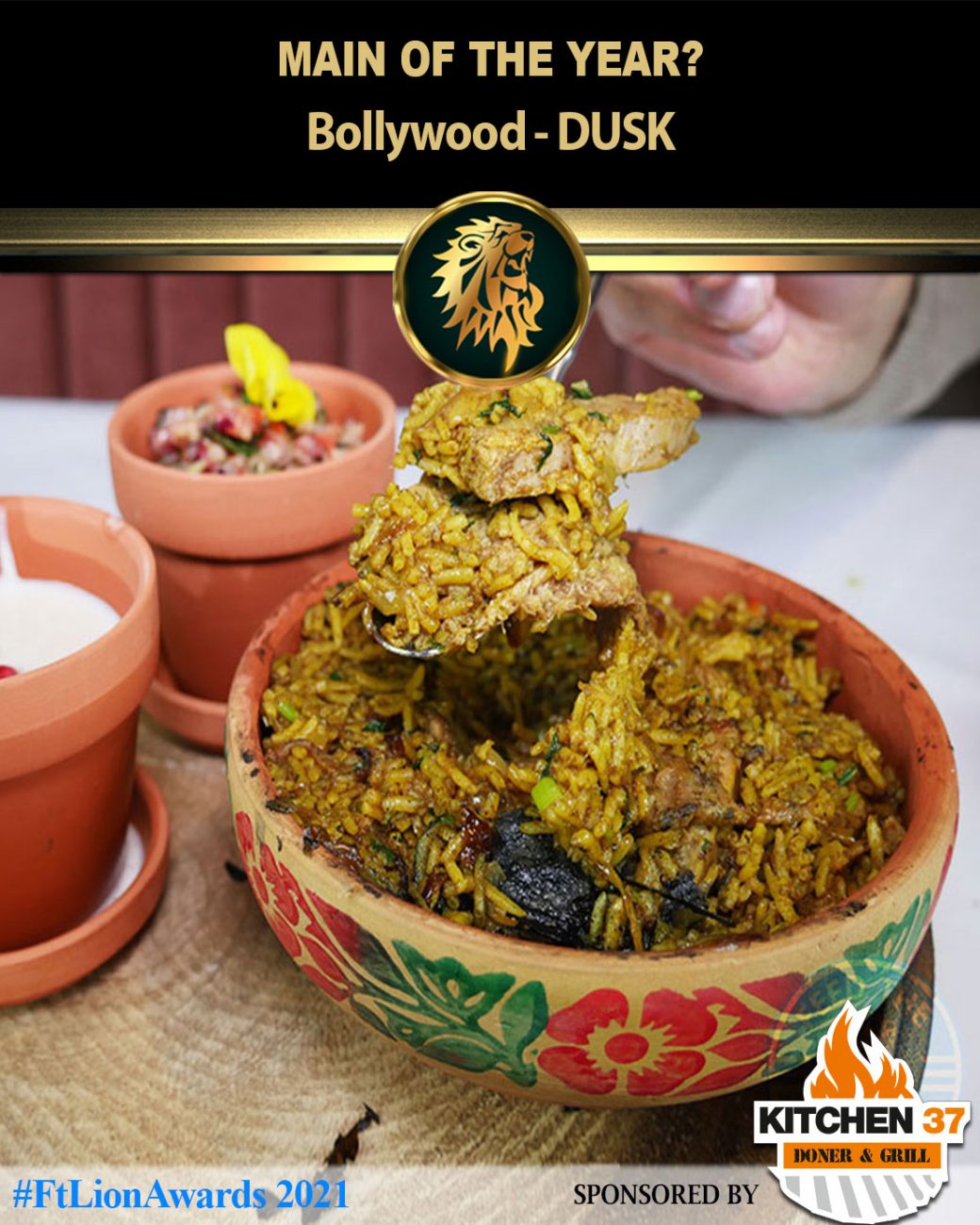 Battle of biryanis, we know; but DUSK in Essex also put up one which we described as an “exceptionally mind-blowing first experience”. This duck-based ‘Bollywood’ biryani was “one of the best biryanis we’ve ever had”. 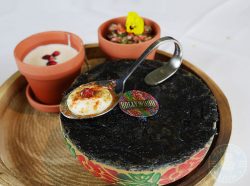 Not only did the fatty duck meat play its part in imparting that extra dimension, the standout feature of this dish was the balance of spices.

Presented in a clay bowl and topped with a charcoal covered paratha (blackened fingers ensued), we first enjoyed the creamy-cool sensation of the yoghurt globule, before carving open the paratha seal and being engulfed in a steamy waft of spicy aroma.

An endearingly moist affair, with a masterfully-balanced mixture that managed to magically deliver gentle spices without ever overwhelming the senses or overpowering the palate. 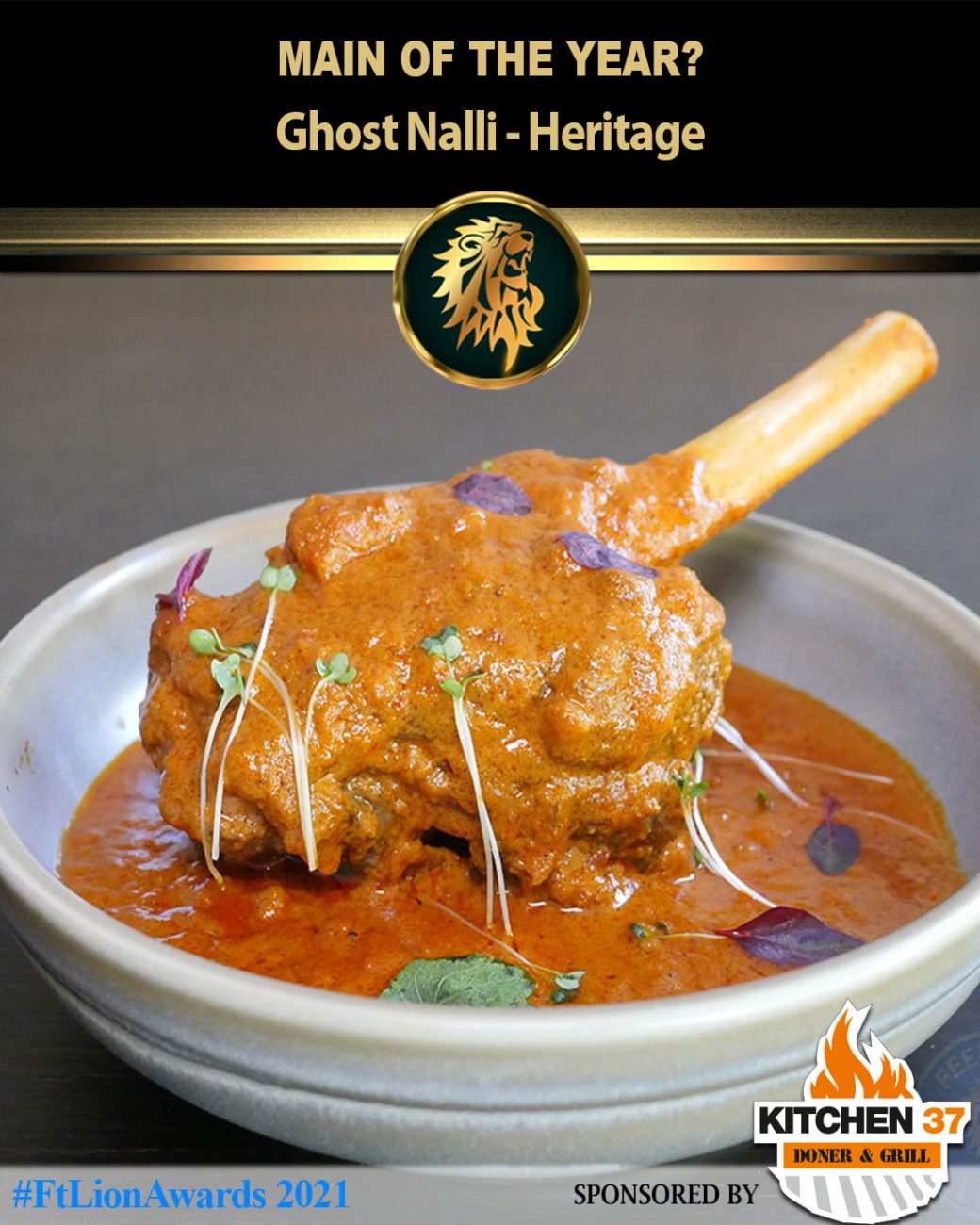 With a starter already up, 5/5 Heritage in London Dulwich put up an especially good Ghost Nalli, with a quality piece of meaty-cum-fatty lamb-on-the-bone which flaked away with minimal effort.

But it was that creamy textured sauce, made rich and sweet, no doubt, by all the brown onions making up its base, that made this bowl sing the high notes. Additionally, a careful combination of the masala coated the palate to titillate the tastebuds, with the heat ambling in the background. 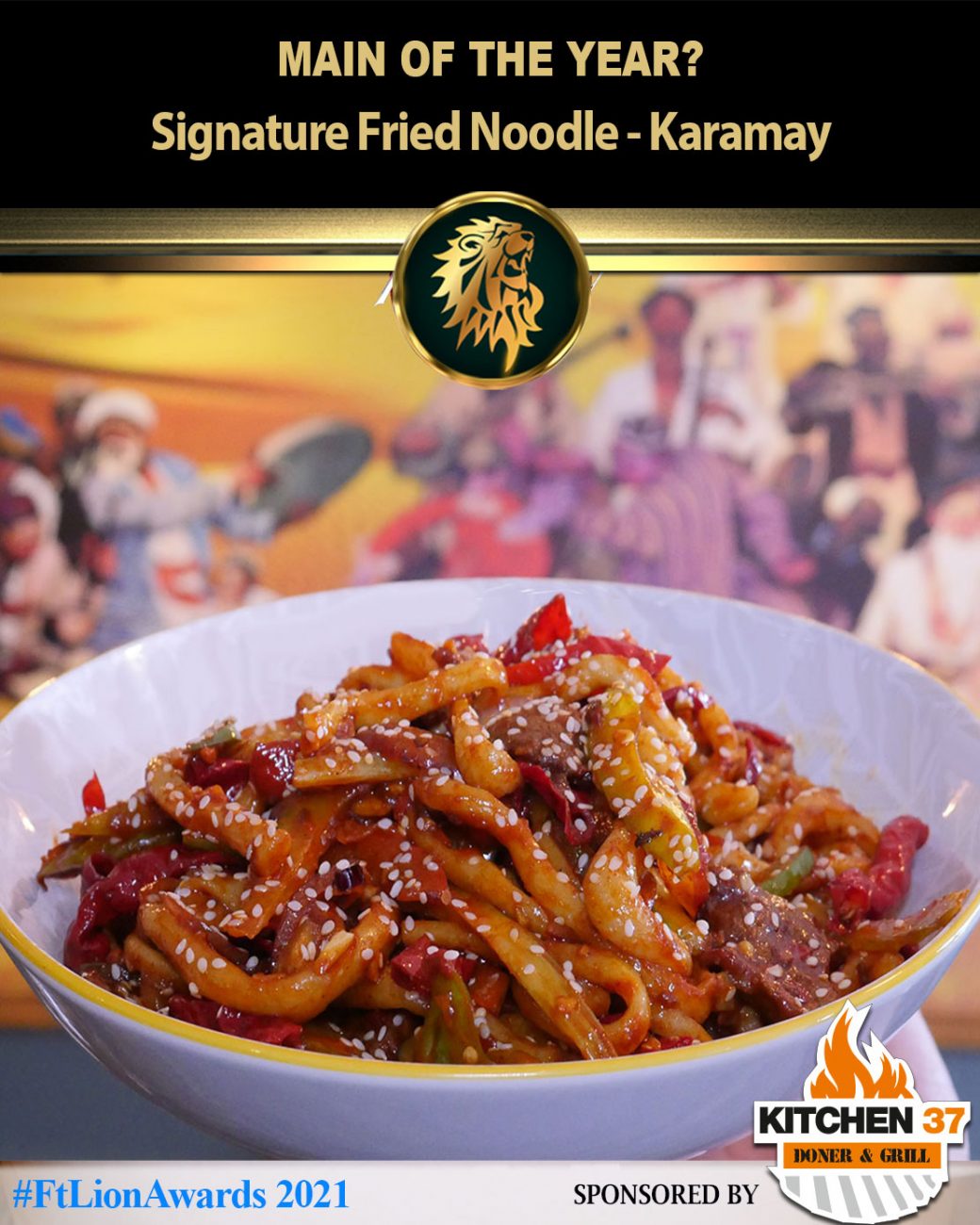 Uyghar restaurant Karamay in London Hackney presented their Signature Fried Noodle, which was made using a dry variety of chilli which contributed to the level of heat that collectively excited us.

And with the noodles in this large bowl being of the thicker variety, we thoroughly enjoyed its more chewier texture, in addition to the smoky undertone that underpinned one of the best dishes during this review. 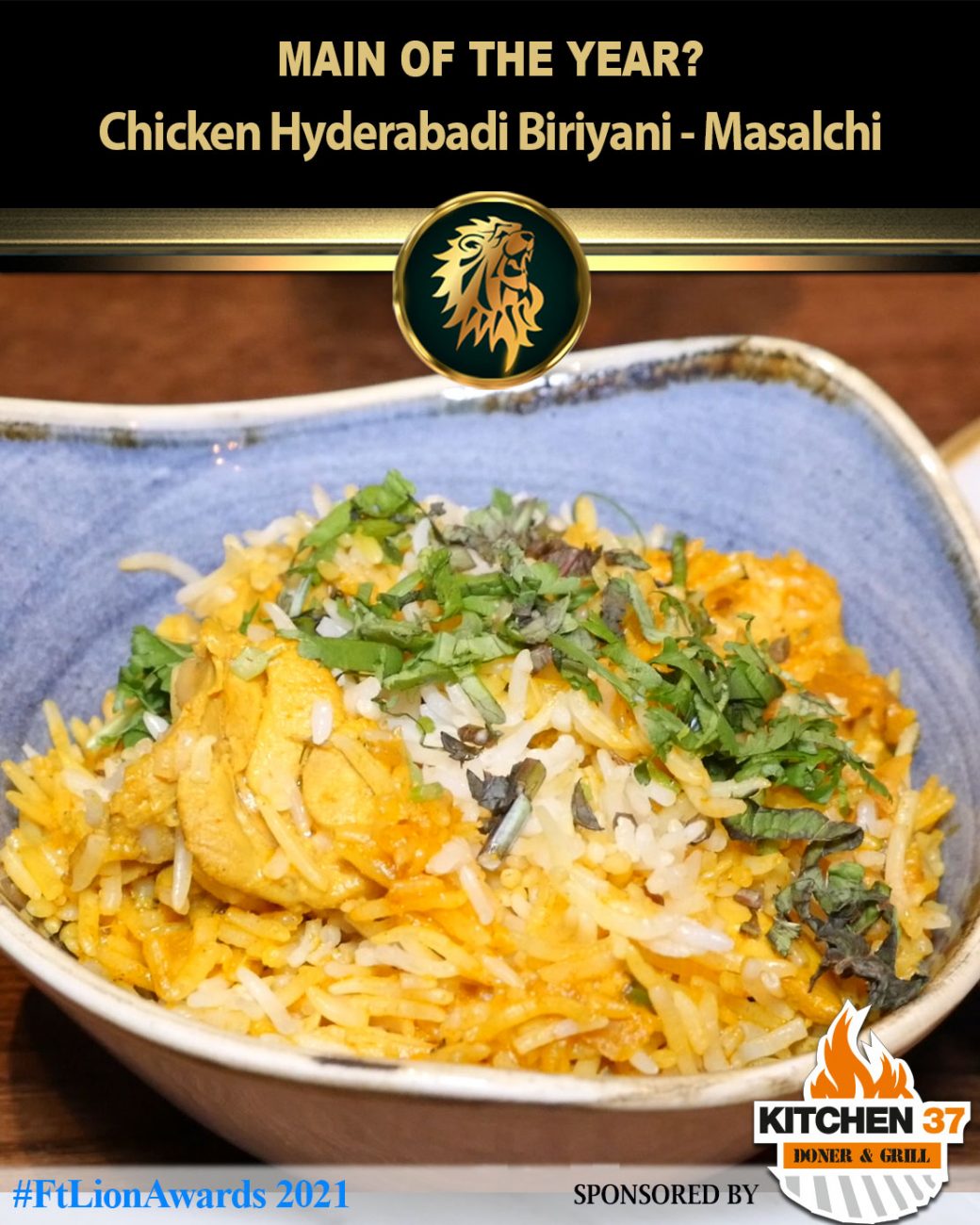 Double Michelin Chef Atul Kochhar’s Masalchi in London’s Wembley also served us a Chicken Hyderabadi Biriyani which we simply cannot ignore in this category, it was that good.

Ultimately driven by some uniquely aromatic and herbaceous flavours, it was superbly moist, with the poultry as tender as you’d want. 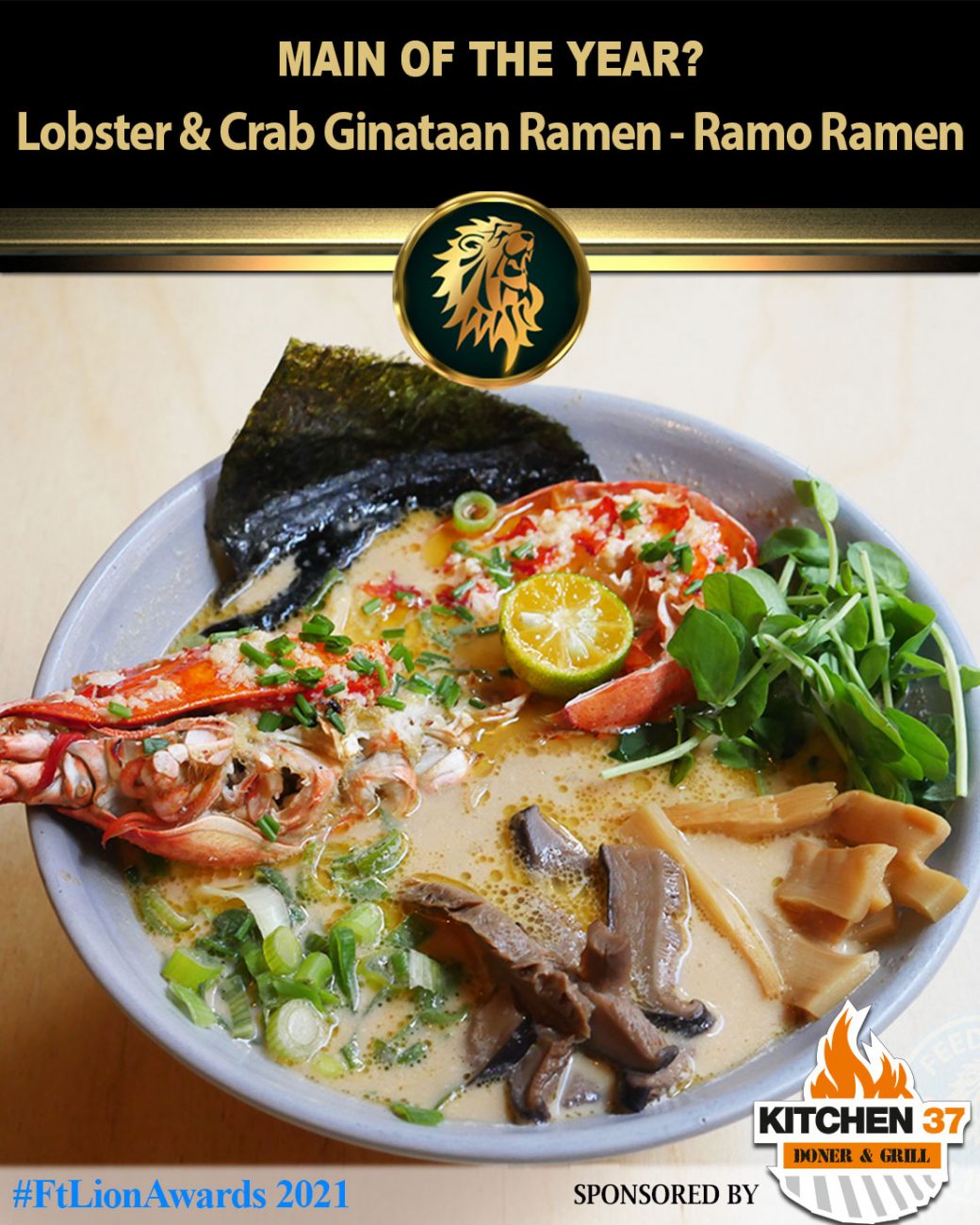 Ramo Ramen is the third and last restaurant this year to earn a flawless 5/5. Of course, given the name and that rating, how could a ramen not be shortlisted? In this case, the thing of beauty that was their Lobster & Crab Ginataan is Ramo Soho’s signature ramen.

Exclusively available only at their Soho branch in the capital, we were presented with a generously sized lobster tail swimming in a smooth broth, respendently dressed in plenty of condiments, and all completed with a lobster claw too. The broth itself was enriched with plenty of butter, and flavoured by a sweet-and-sour combo that was exquisitely balanced, it was absolutely divine.

The choice of noodles too was a masterful stroke, with its firmer texture contrasting perfectly with both the variety of elements therein and the lobster meat – the latter demands being thoroughly dunked in said broth before enjoying its tender chewiness. All in all, arguably one of the best bowls of ramen we’ve ever had! 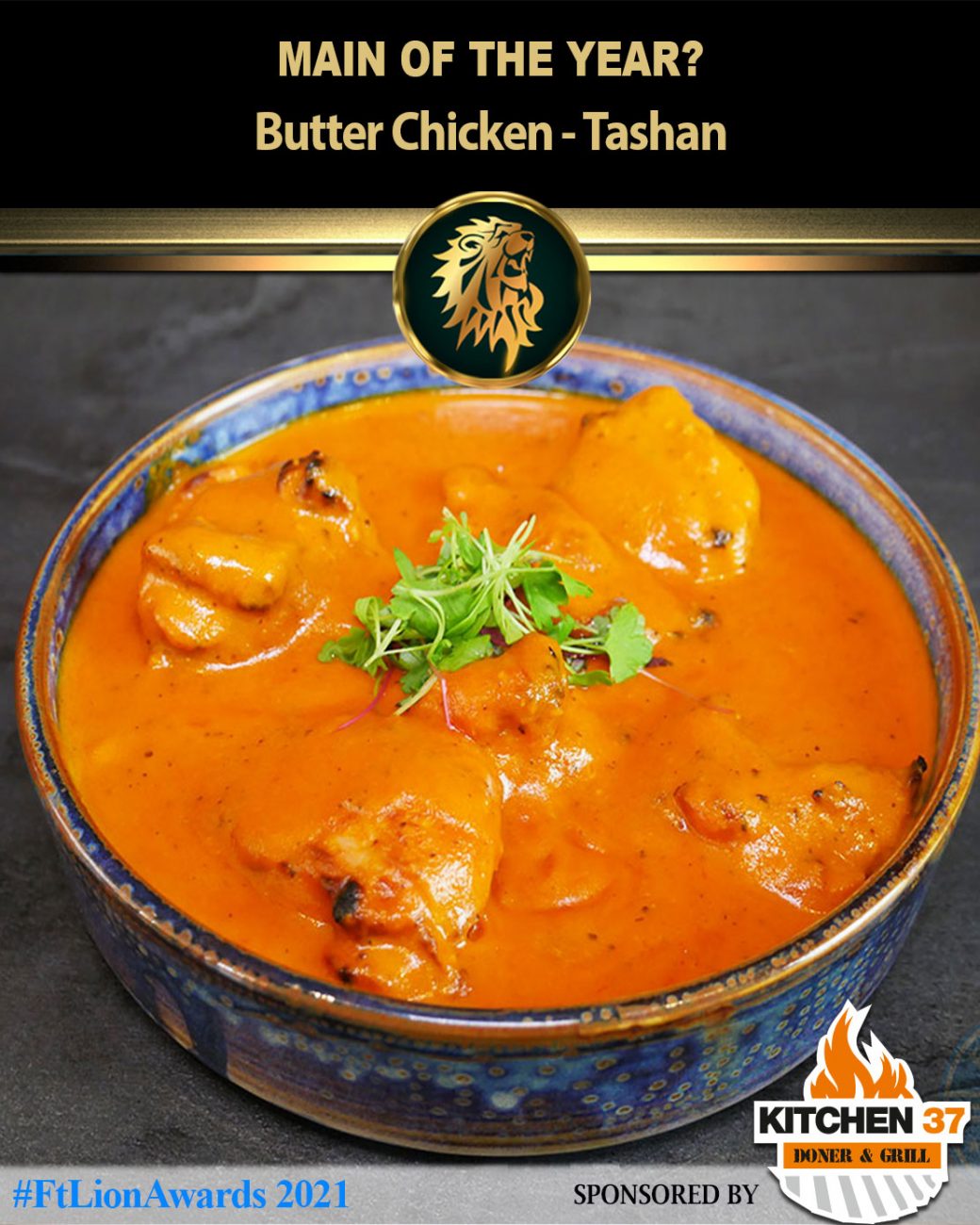 With a starter up for consideration, chef and restaurateur Naveen Dogra’s Tashan in London, Hampstead, also served us probably one of the best butter chickens had this year.

Of all the curries had that day, this was another example exemplifying absolute precision and harmony of spices. Whilst the sour edge of the tomato was superbly counteracted by everything else therein – the chicken also being cooked bang on – this was more a creamy than buttery version of the classic Butter Chicken.

Indian celeb chef Sanjeev Kapoor’s The Yellow Chilli in London’s Wembley makes it three in succession with two drinks on show, a starter and now this extraordinary Josh Rogan ‘Nalli’.

Executed to absolute perfection, along with superbly balanced the spices, the heat here teasingly lingered at the back of the throat, with The Yellow Chilli’s version boasting a comforting homemade quality to it. The secret perhaps was in how the slow-cooked fatty meat had positively suffused the curry sauce to elevate this entire shank to an exceptionally high level of richness.