#FtLionAwards 2021 Starter of the Year shortlist

After the #FtLionAwards 2021 Best Beverage of the Year (proudly sponsored by the hugely impressive, family-run restaurant in east London’s Forest Gate, Kicthen 37), we continue with Best Starter of the Year. 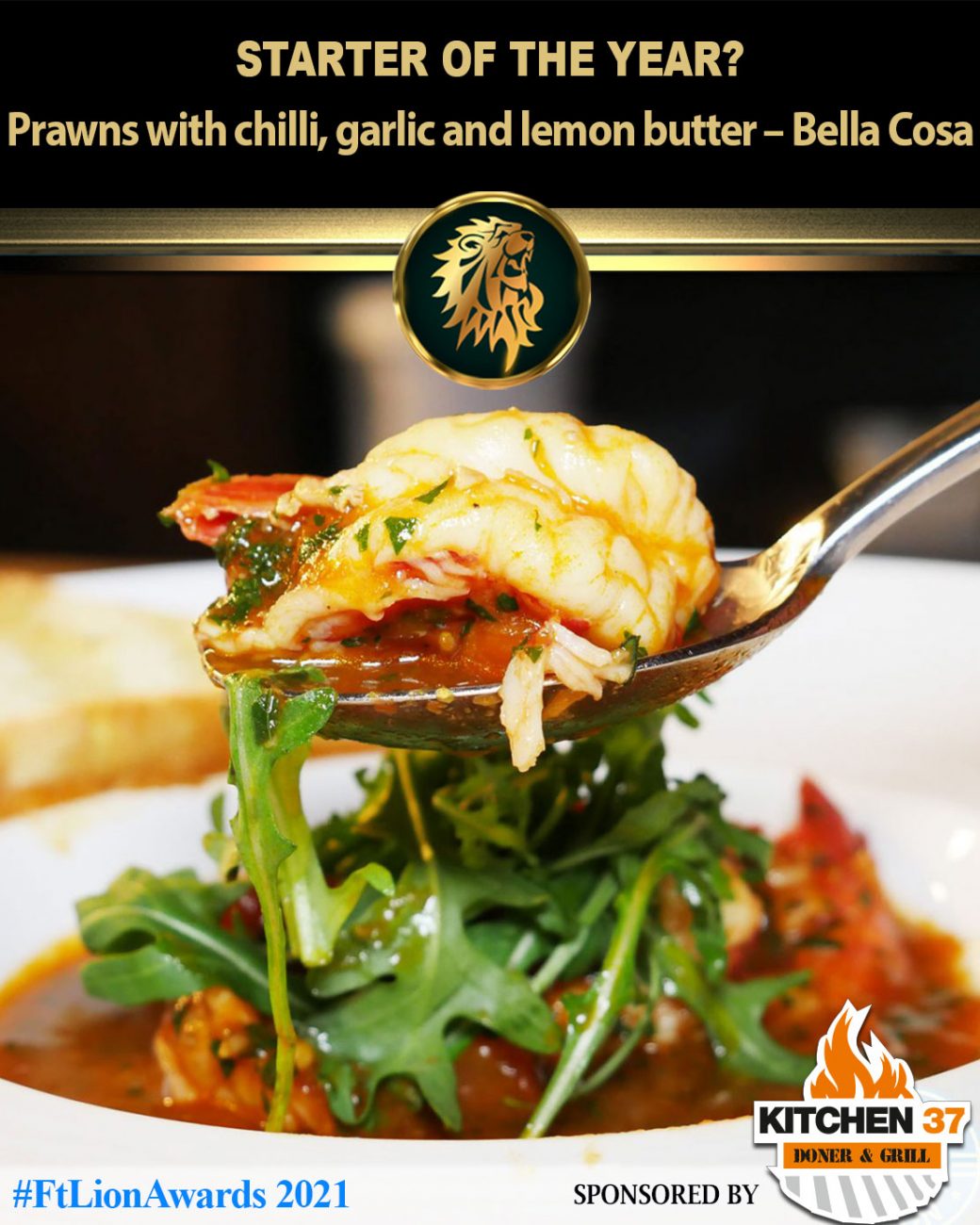 With their Temporale up for drinks award, Bella Cosa in Canary Wharf forwarded their Prawns with chilli dish which we still haven’t been able to figure out to this day. How was the chef able to deliver potent chilli, including managing to infuse that rich, tomato and garlicy sauce, without overwhelming the naturally subtle flavour of seafood?

Couple that with tender, deshelled prawns, as well as soft cherry tomatoes left to soak in all that herbaceous chilli sauce, and this was a memorable starter. 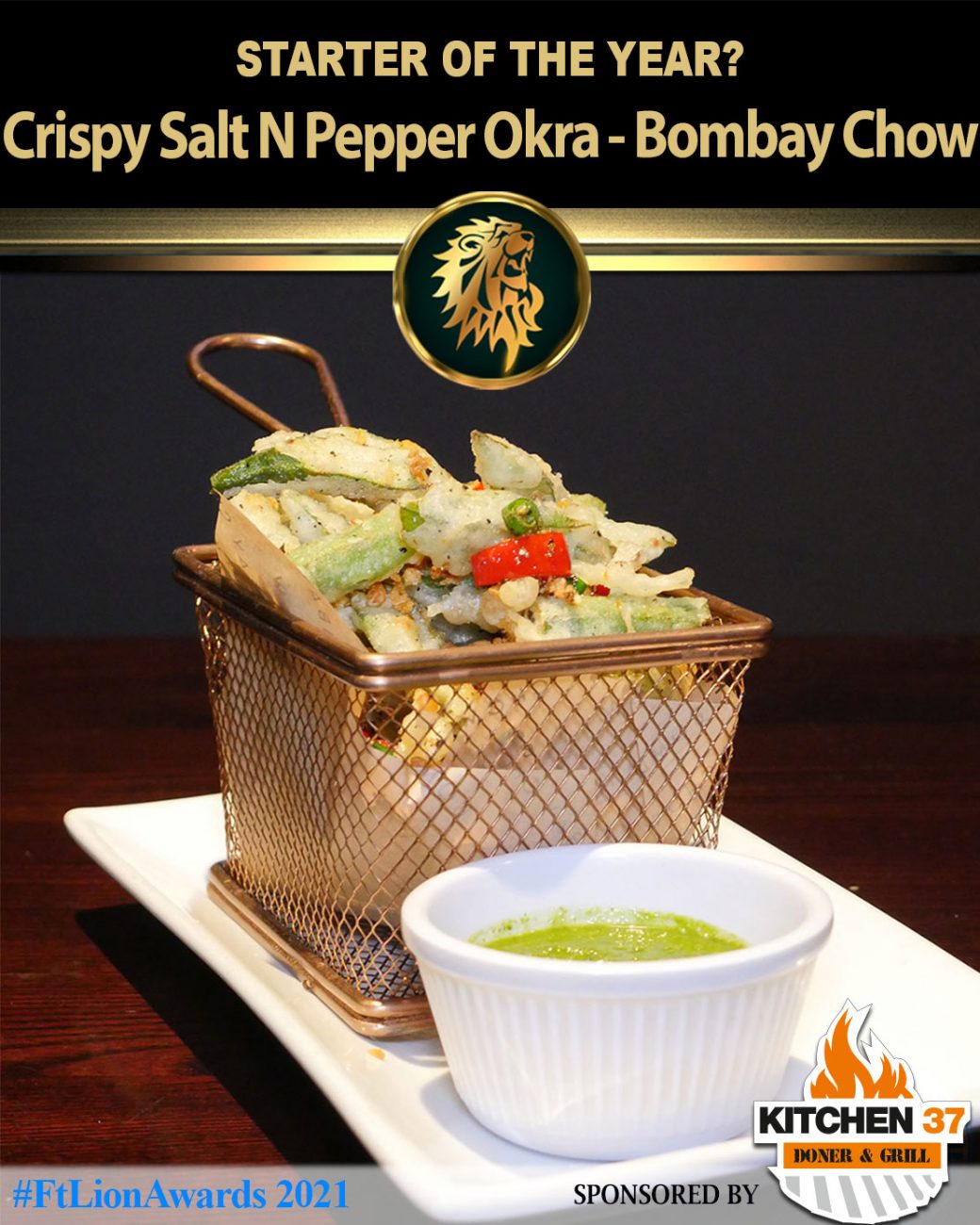 Bombay Chow in London Wembley is the sister restaurant of Fatt Pundit – #FtLionAwards Best Restaurant 2019. This rustic Crispy Salt N Pepper Okra reminded us of the small dishes had back then which earned them said win.

A cracking little starter (and in more ways than one) this turned out to be. Uber crispy, with diced red and green chillis providing background heat, the sea salt and pepper made this one of the best starters of the evening. 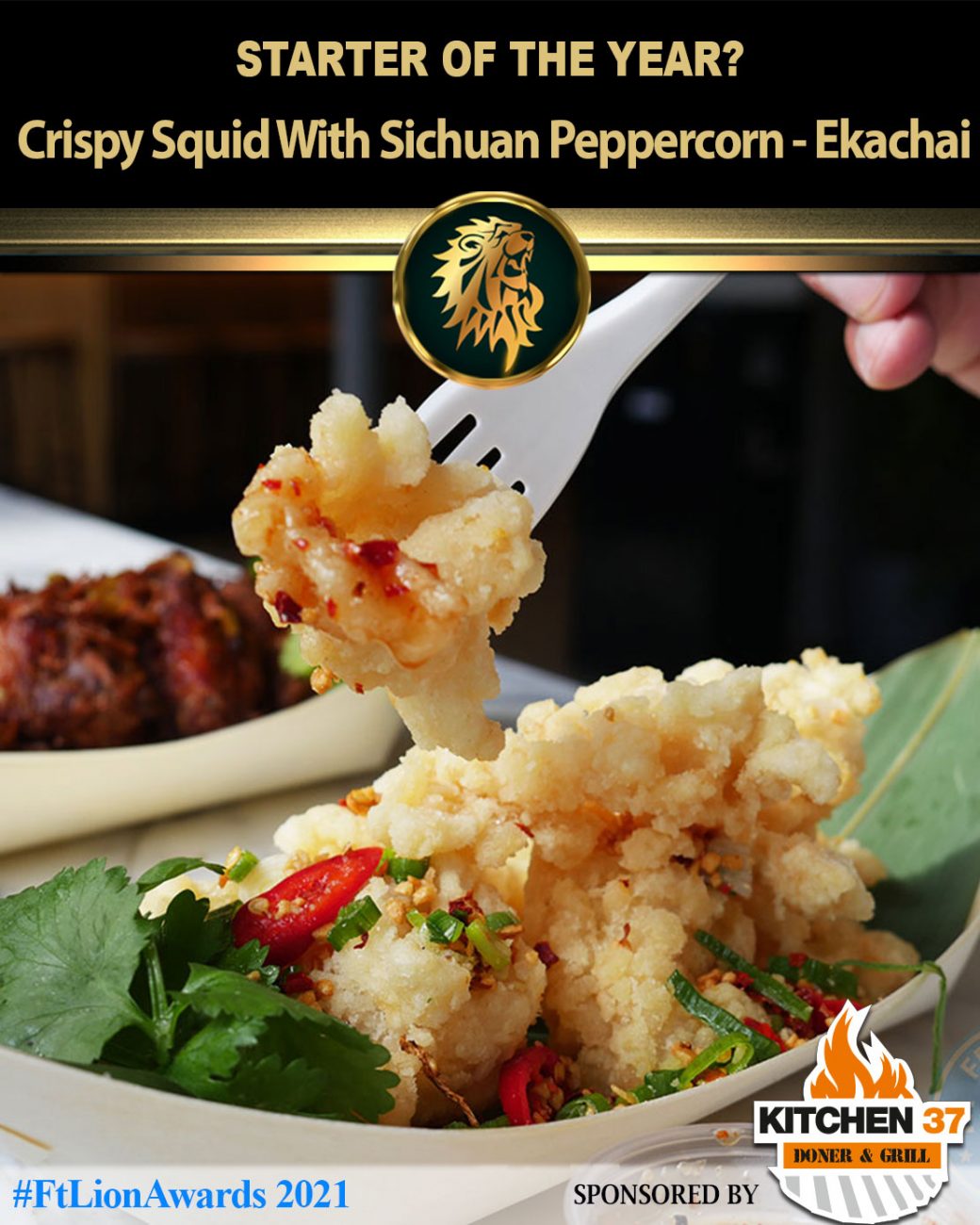 Ekachai in London Camden really did surprise us with this utterly scrumptious Crispy Squid with Sichuan Peppercorn, where the strips of squid, having retained just that right level of chewiness of perfectly adjudged cephalopods, were surrounded by a delicately light and non-greasy batter that proved beautifully crisp and airy.

While making sure to cover these beauties in plenty of that fresh zesty lime juice, we couldn’t get enough of these when had with the sprinkling of the crushed sichuan peppercorn, the fried garlic, the diced chilli, and that sweet chilli sauce. 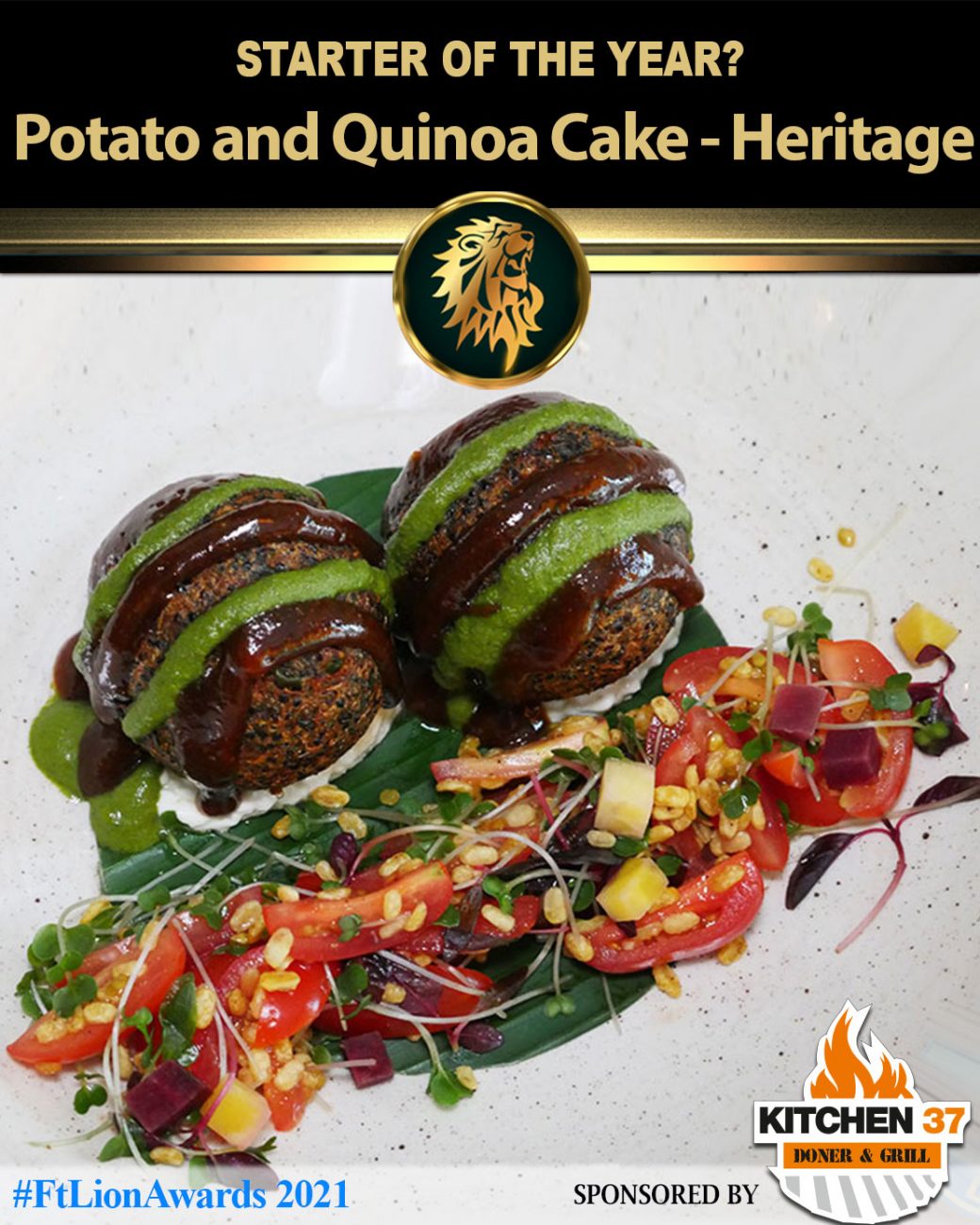 Heritage was the first restaurant this year to achieve a perfect 5/5 rating. And this attractively presented Potato and Quinoa Cake, which you won’t find at any local curry house, was the beginnings of greatness.

An absolutely extraordinary invention this is, with the Quinoa dexterously shaped into delicate balls before being stuffed with a stringy cheese, which really did impart some smokiness, to go with the chilli heat, the mint sauce, the moments of sweetness, as well as the occasional ginger freshness. 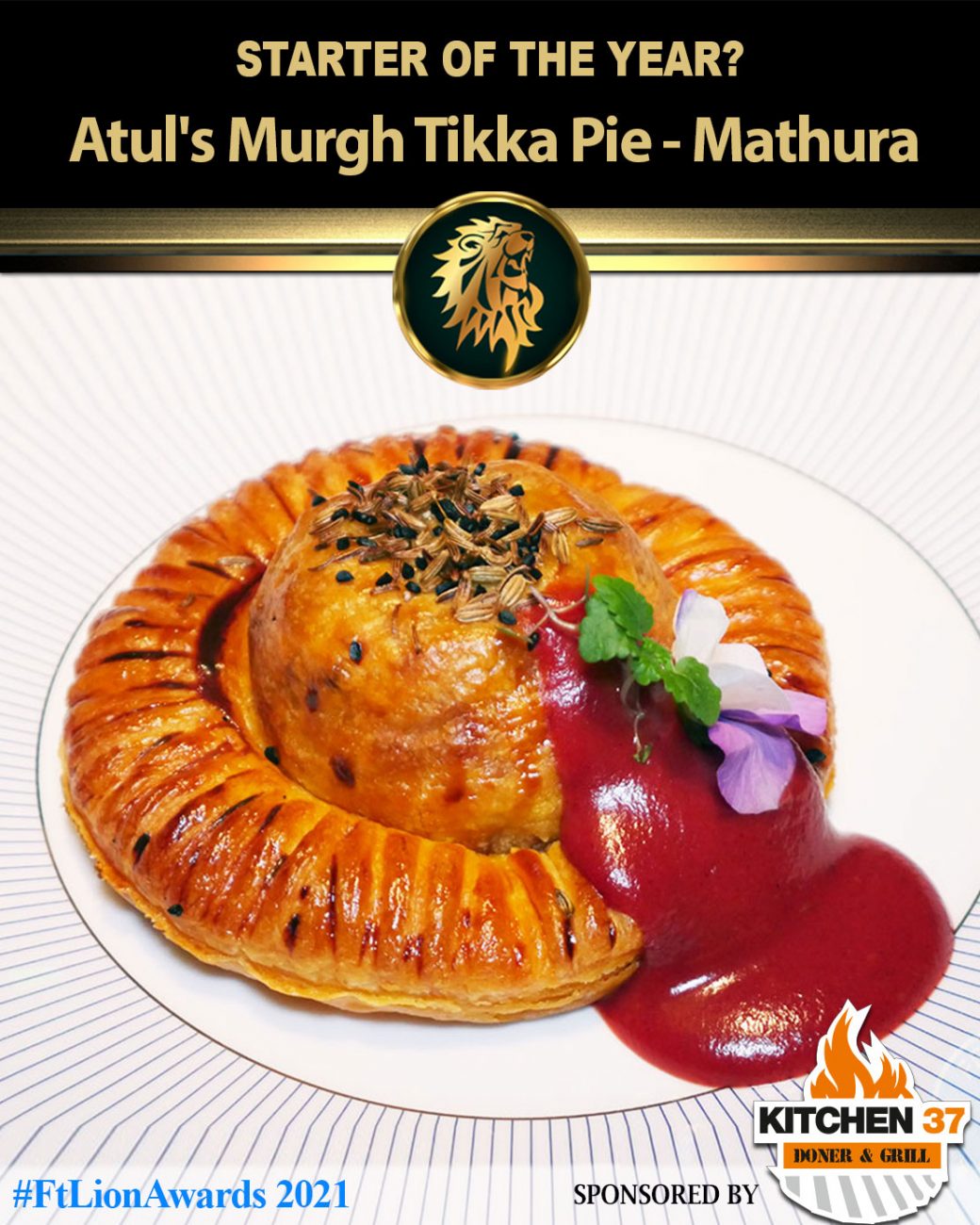 With their ‘Afghanistan’ already nominated, Doubel-Michelin Chef Atul Kochhar’s Mathura in Westminster put up another amazing desi pie. You might recall that his award-winning Chicken Tikka Pie served us in Kanishka was so good that it was voted runner-up for our FtLion Awards ‘Best Starter’ in 2019. Here we have his variantly spelled Murgh Tikka Pie.

As concluded during our review: “One of the best pies we’ve ever had!” This golden, saucer-shaped thing of beauty boasted the crumbliest, flakiest pastry casing you could ever hope for, with the fragrant fennel seeds decorating the outside adding to what was a mesmerically spiced chicken mince filling, which we couldn’t get enough of. 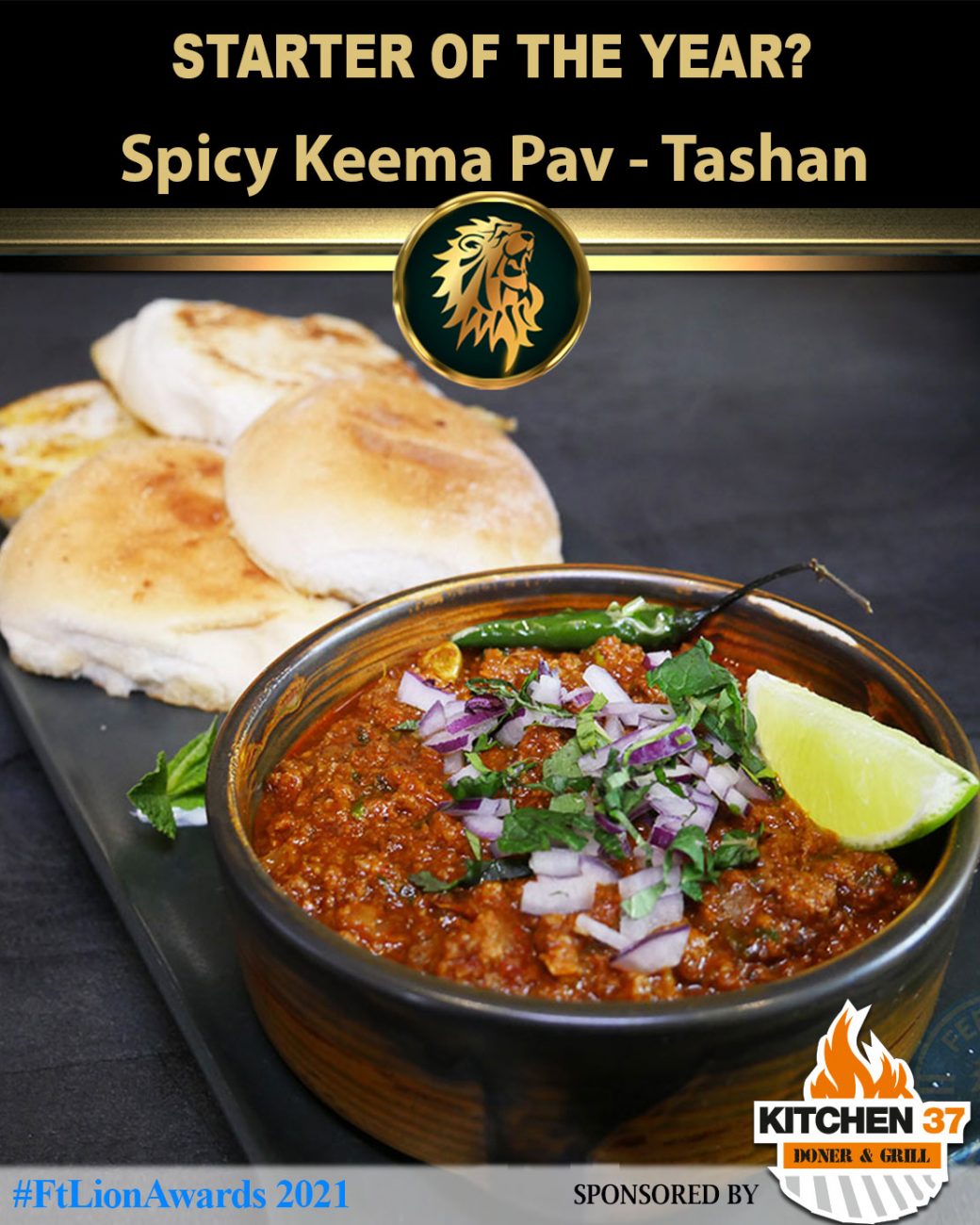 Chef and restaurateur Naveen Dogra’s latest addition to his growing list of London restaurants Tashan in Hampstead served us this Spicy Keema Pav which was arguably the best keema pav we’ve had.

With a balance of spices so masterfully achieved that, despite the degree of heat therein, at no stage were our palates overwhelmed. To the contrary, we luxuriated in the richness of the creamy mince, and its accompanying buttered bun, one satisfying bite after another. 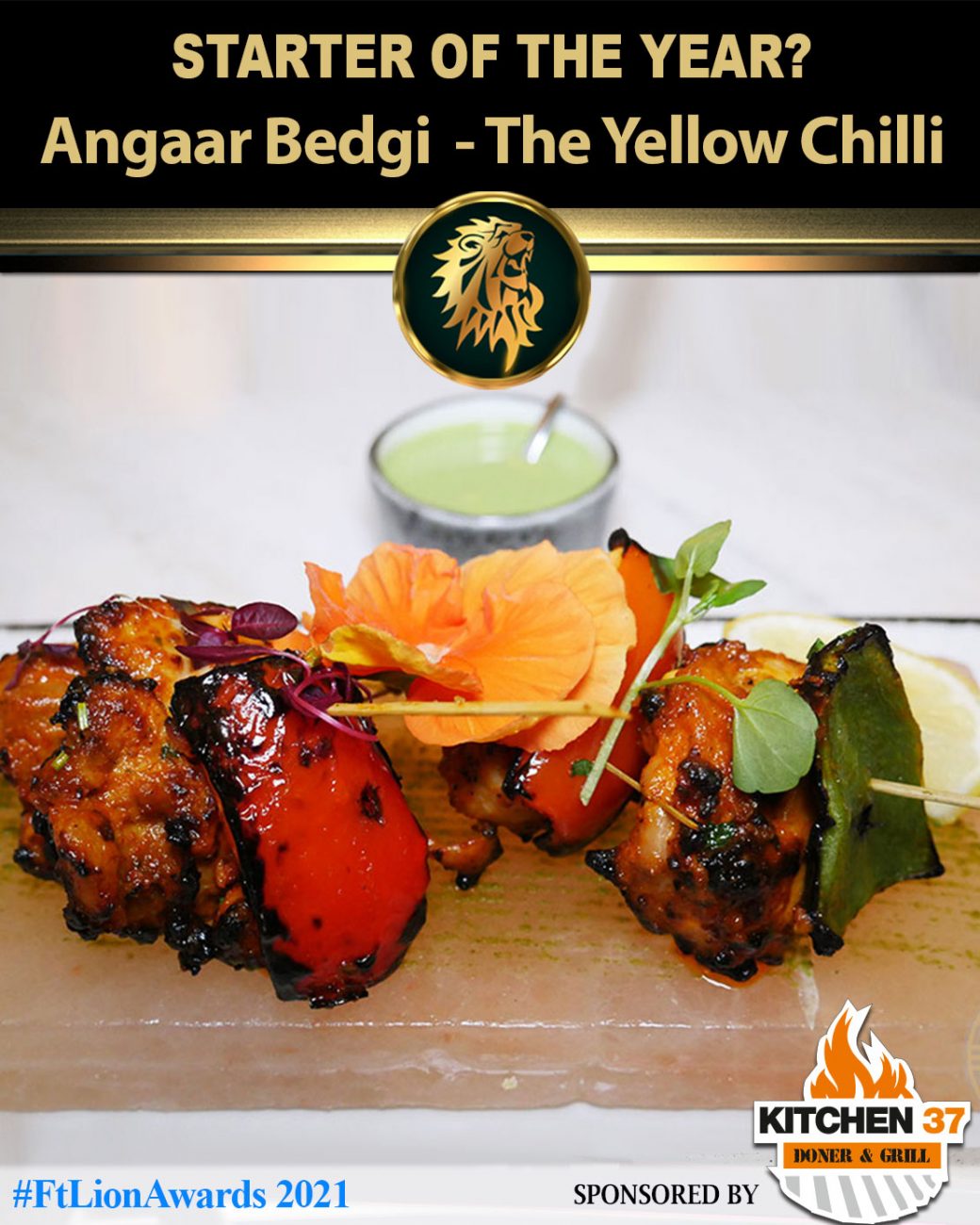 Indian celeb chef Sanjeev Kapoor’s The Yellow Chilli in London’s Wembley doesn’t have one, but two drinks up for consideration. Here again he returns with this extraordinary ‘Angaar Bedgi’ Tikka on Himalayan Salt Brick.

If you enjoy your chillis, then this isn’t just designated ‘3-chillis’ hot on the menu, but delivers it too. With moist and tender chicken, which shows off some beautiful tandoori charbroiling, the marination has a sweet edge to it, and is nicely complimented by the mildly hot coriander sauce. But what elevated this to the next level was the large slab of rock salt this was presented on to give it that hit of saltiness.