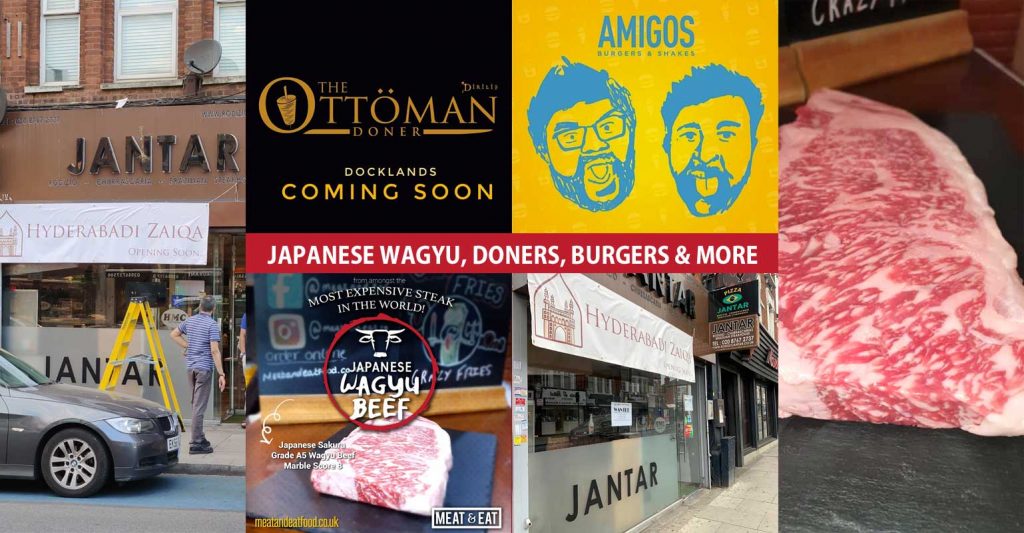 There’s been a number of early new opening announcements, as well as sad news of the closure of a well known Brazilian eatery, this week.

Firstly a passing farewell to Jantar in Tooting, which was one of the few Halal options in London to offer a Brazilian all-you-can-eat (rodizio) churrascaria experience with roaming waiters carving skewers of slow cooked meat in situ on request.

Jantar will be replaced by Indian establishment Hyderabadi Zaiqa – a “HMC certified” restaurant that aims to launch in the first or second week of September.

With a minimum seating capacity of 60, it will be offering a menu that will include “Hyderabadi dum biryani, haleem, dum ka chicken, Nizami gosht, Chicken-65, Chicken Majestic” and more.

‘Most expensive [Halal] steak in the world’ comes to Wolverhampton

Wolverhampton’s Meat & Eat steakhouse has introduced “the most expensive steak in the world” in the form of Japanese Sakura Grade A5 Wagyu Beef which boasts a marble score of 8.

Calling this their ‘Wagyu Wolves’, these “mouthwatering” steaks are now available for pre-order only with 72 hours advanced notice (Meat & Eat are also part of 50% off ‘Eat Out To Help Out’ scheme).

In addition, they launched a dine-in breakfast menu this week comprising of French toasts, American pancakes, egg specialities, a full English fry-up, among other items.

Following the opening of their second branch in east London’s Manor Park in March, The Ottoman Doner have already announced the location of their third on Poplar’s East India Dock Road.

The doner specialists are also vying for the British Kebab Awards “Best Takeway” in London after their first restaurant in Whitechapel was named runner-up for Best Kebab Restaurant in South and East London earlier this year.

While The Ottoman Doner’s next post will confirm an opening date and a 100 doner kebab giveaway, Amigos will be adding to its family of eight siblings in London with a branch scheduled to open soon in Stoke Newington.