After 10 categories and 71 nominations; the revaluation of review marks and the tallying of scores; plenty of head scratching, debating and squabbling; and the end of an epoch-defining year – it all comes down to this.

Here are the results of #FtLionAwards 2021 (huge thanks to our sponsors and the hugely impressive, family-run restaurant in east London’s Forest Gate, Kitchen 37). 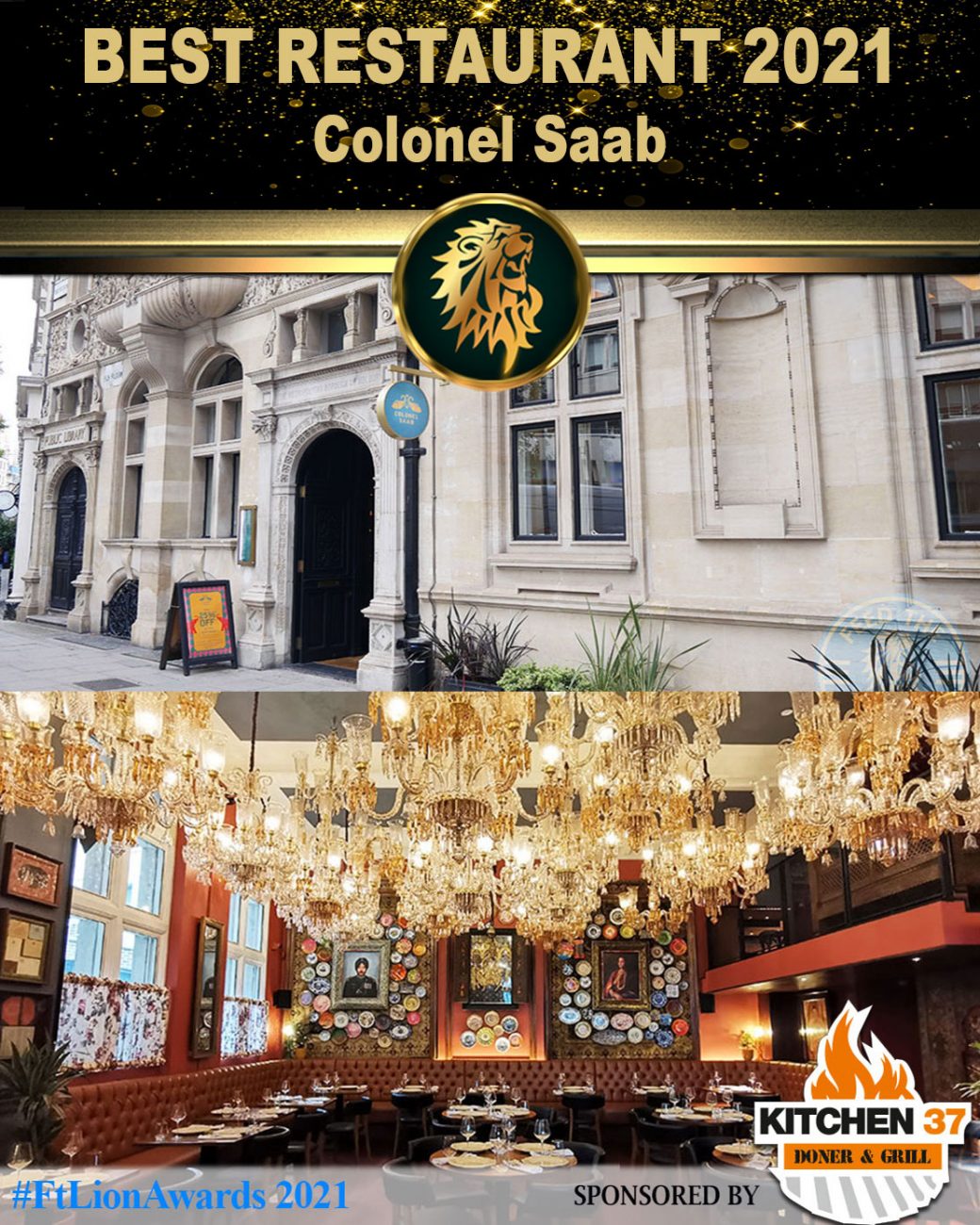 You’ll understand how difficult this year’s #FtLionAwards has been with not one but three restaurants being rated 5/5.

Prior to this, and since 2016, only four restaurants had achieved this rare feat: Nine7One and Darbaar in 2016, and Grand Trunk Road in 2017 being followed three years later in 2020 by Maison Bab.

The first 5/5 this year was Chef Dayashankar Sharma’s Heritage in London Dulwich, whose locals will have wondered what they’ve done to deserve a restaurant as good as this.

This was suddenly followed by two more in just one month with Colonel Saab in Holborn and Ramo Ramen in Soho (the latter marginally missed out on a 5/5 back in 2019 when we reviewed its Camden branch).

Ramo in Soho finally does it!

So why has Roop Partap Choudhary’s Colonel Saab pipped em to the post? Despite there being very little to choose from between them, in the end it was Colonel Saab’s resplendently opulent interior that proved the decisive factor.

Having been nominated for best newcomer, beverage, main, grill, and dessert – before its Coriander Cooler won ‘Best Beverage and its Hyderabadi Chicken Biryani was voted both runner-up and readers’ choice – Colonel Saab is #FtLionAwards ‘Best Restaurant’ 2021!

And because comparing the respective menus of Heritage’s Indian cuisine and Ramo’s Filipino-Japanese dishes was a case of comparing apples and oranges, with both being small and discreet in size, we just couldn’t separate the two for this year’s runner-up.

As for readers’ choice, then it was DUSK in Brentwood, Essex, and its Michelin-inspired menu by Chef Stephen Gomes, which impressed you. 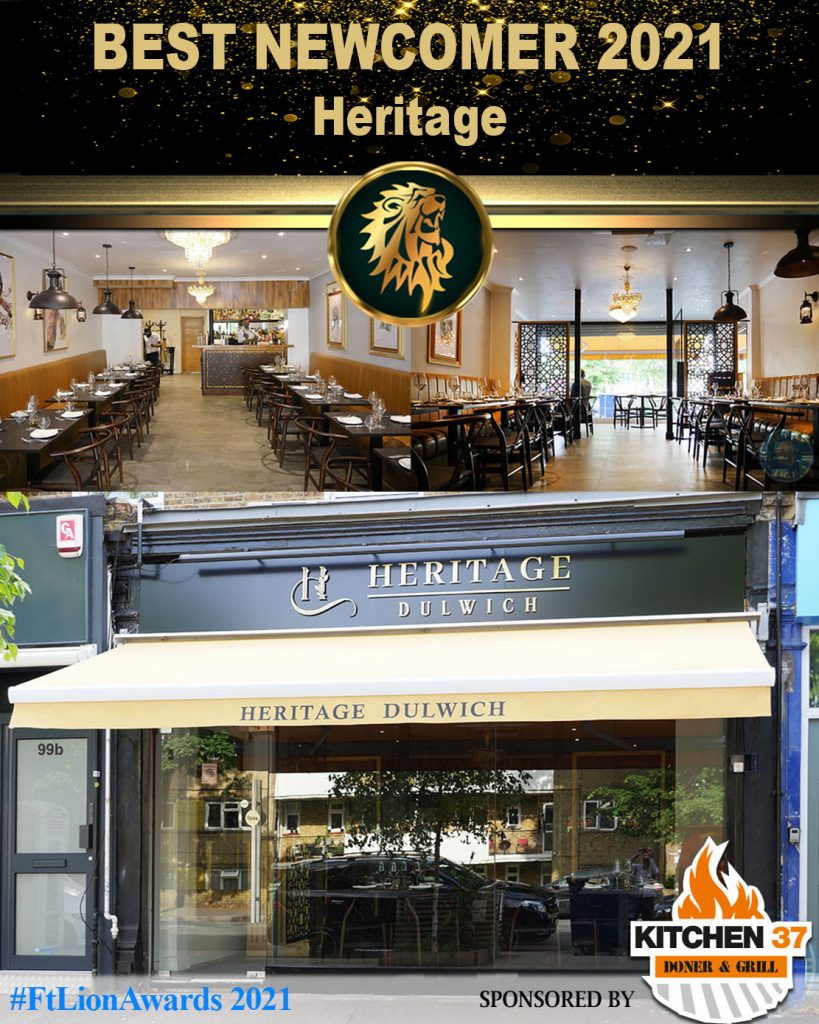 When it comes to Best Newcomer, however, then we couldn’t look past Heritage, simply because of what it brings to its humble location when compared to Colonel Saab’s swanky Holborn location and Ramo’s Soho.

Having been nominated for seven categories this year, with its Potato & Quinoa Cake winning ‘Best Veggie’ and runner-up for ‘Best Starter’, those Heritage Lamb Chops for ‘Best Grill’, followed by the Goan Stuffed Fish coming in second for ‘Best Seafood’ , Heritage is #FtLionAwards ‘Best Newcomer’ 2021.

Following the same line of reasoning, Ramo Ramen, which punches way above its humble stature, is this year’s runner-up, with easily the best Halal ramens in London, or, dare we say, the UK.

As for readers’ choice, then pro-boxer Sohail Ahmad’s Eggoland in London Fitzrovia got your vote, with a brilliantly conceived menu that revolves exclusively around eggs. 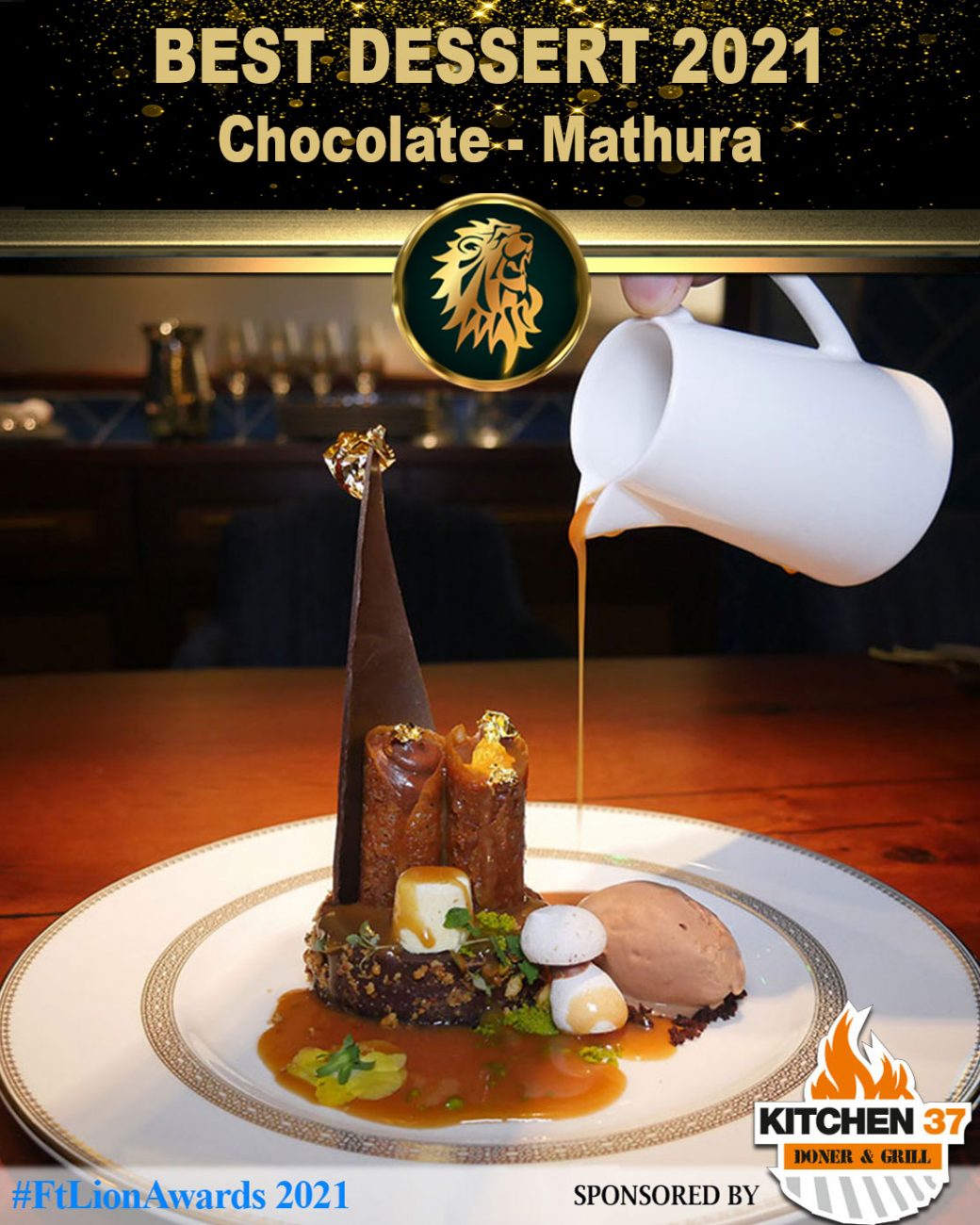 Truth be told, of all the desserts had this year, there were two that just stood head and shoulders above the others in terms of both flavour and technical skill.

Double Michelin Chef Atul Kochhar’s Mathura in Westminster served us the Chocolate followed by the Ghewar. Each utterly different from the other, and yet delivering on a plethora of textures and tastes to ensure that the former is #FtLionAwards ‘Best Dessert’ 2021, and the latter, its runner-up. 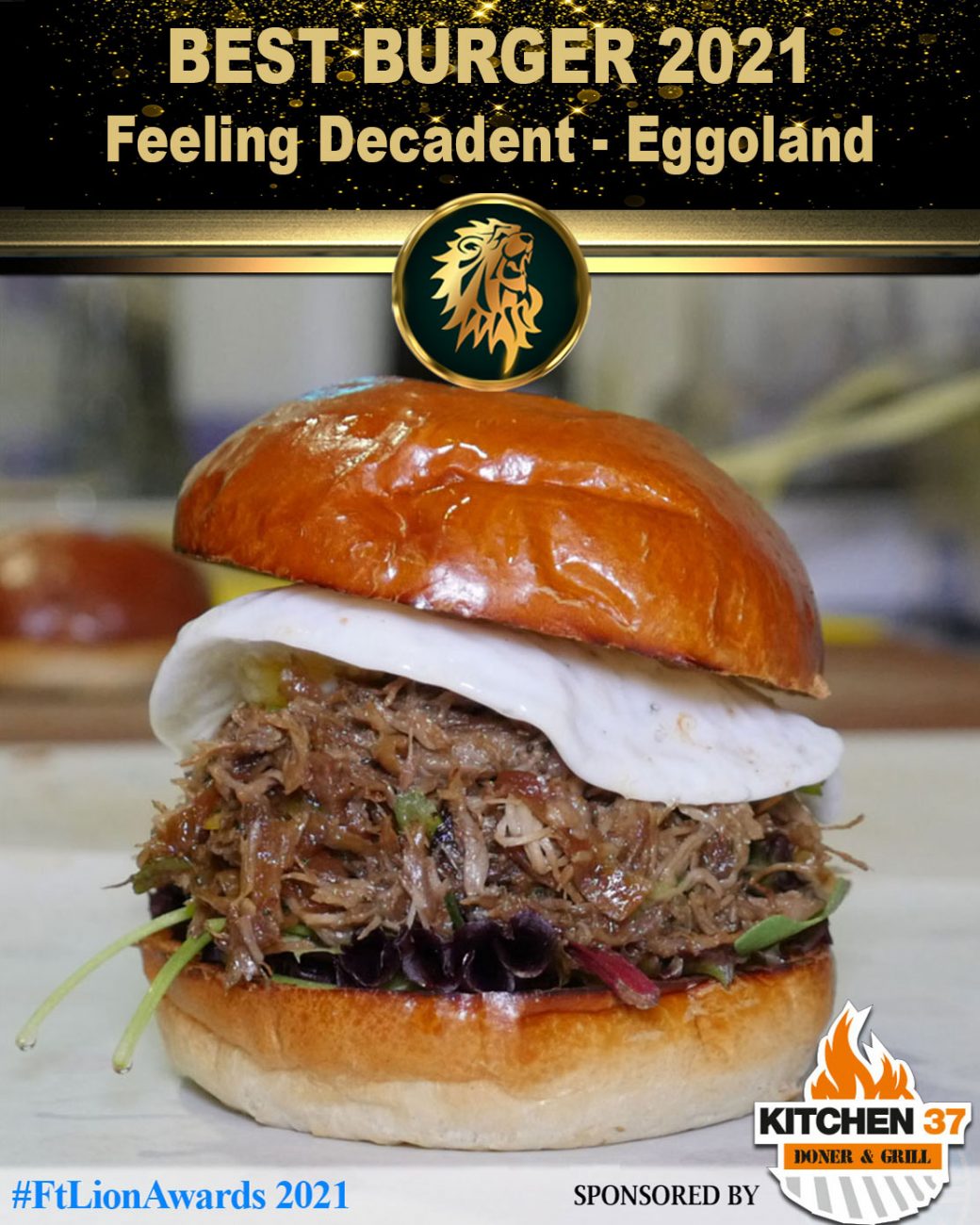 With a number of memorable burgers had at Eggoland, it was the Feeling Decadent duck burger which was on another level. 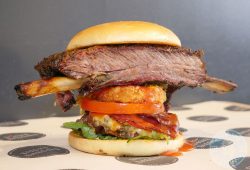 Smoke Daddies’ A Bone To Pick

The face-down fried duck egg’s yoke offered a deep, earthy richness that combined with the familiar umami-meatiness of the tender shredded confit duck, along side the sweetness of the caramelised onions, to deliver #FtLionAwards ‘Best Burger’ 2021.

Our runner-up was Smoke Daddies extraordinary A Bone To Pick. This housed a huge dino bone, which had been through a 10-hour cooking process, that entirely enthralled us. Pulling out the bone from this single beef short-rib was simplicity itself, making this an Instagrammer’s wet dream. Whatever way you choose to devour this, one thing’s for sure, it’ll prove a fun and truly delightful eat.

As for you lot, then Burger LDN’s superbly executed Classic Burger LDN, with a 3.5oz patty that boasted a caramelised exterior, was easily your fave. 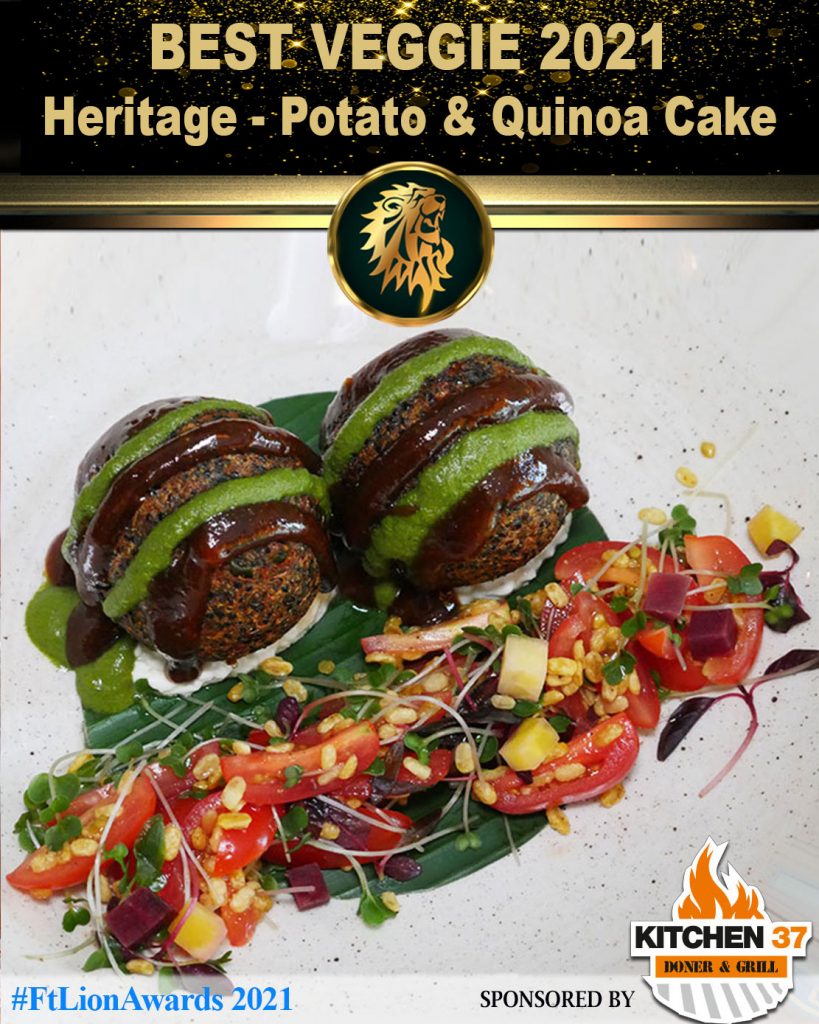 If there was a single dish that defined Heritage’s incredible menu, it was this unique Potato and Quinoa Cake. To be honest, there wasn’t much in it between this and Mathura’s extraordinary Awadhi Gucchi. 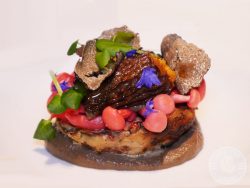 However, there was a certain charm to this dexterously made dish, with its delicate quinoa balls stuffed with a stringy cheese, and all those flavours, ranging from smokiness to chilli heat and minty-sweetness, giving this the edge.

As for Mathura’s, then this took us on an undulating ride across the umami landscape. While the morels stuffed with paneer cream worked in tandem with both the dark and creamy-smooth puree, as well as what appeared to be pickled enoki mushrooms, to deliver the earthy with the nutty and mellow sweet, a positively saturated, soft and tender portobello mushroom helped cut through the richness. Stunning!

Your choice was Eggoland’s vegan Fakey Eggs’n’Baccy burger, whose segments of sausage delivered on both the texture and mild smokiness, while the fake egg turned out to be ultra soft and scrambled. If we didn’t know this was vegan, we’d probably come away believing it was anything but. A unique experience. 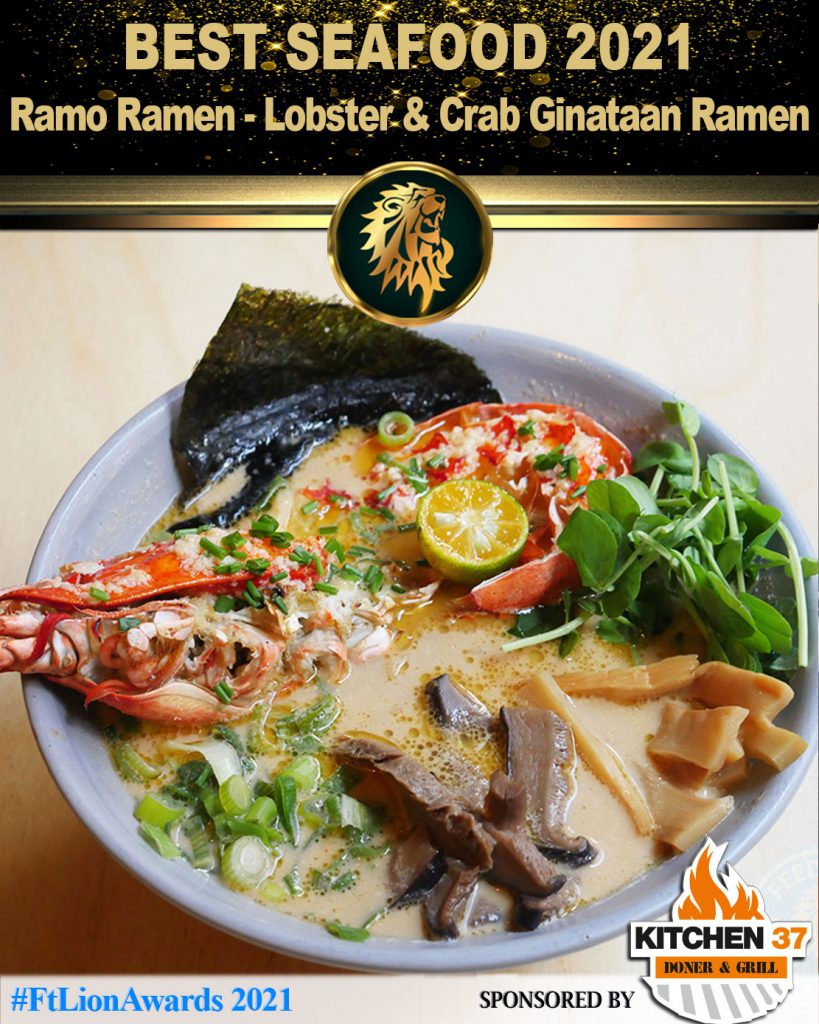 Given the preparation required in making an authentic ramen, as well as the perfect execution achieved by Ramo, their Lobster & Crab Ginataan Ramen – an exclusive to their new Soho branch – was masterfully done. 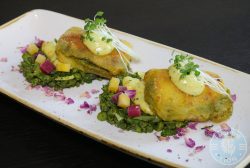 “All in all, arguably one of the best bowls of ramen we’ve ever had,” is how we concluded our review of this; and for these reasons, Ramo’s ramen is 2021’s ‘Best Veggie’ dish.

On any other day, it would have been Heritage‘s desi-take on cod and peas and their Goan Stuffed Fish which would have succeeded. With a portion of Tilapia encompassed by a variety of complimentary elements, this brilliantly conceived plate has to be the runner-up.

Readers’ choice went to a fish from across the border to India and Tavah‘s deliciously fried Pakistani Masala Fish. Located in Hertfordshire’s St. Albans, this Pakistani restaurant presented a quality piece of flaky, tender cod that was marinated in a “unique masala comprising of 36 different ingredients & spices”. 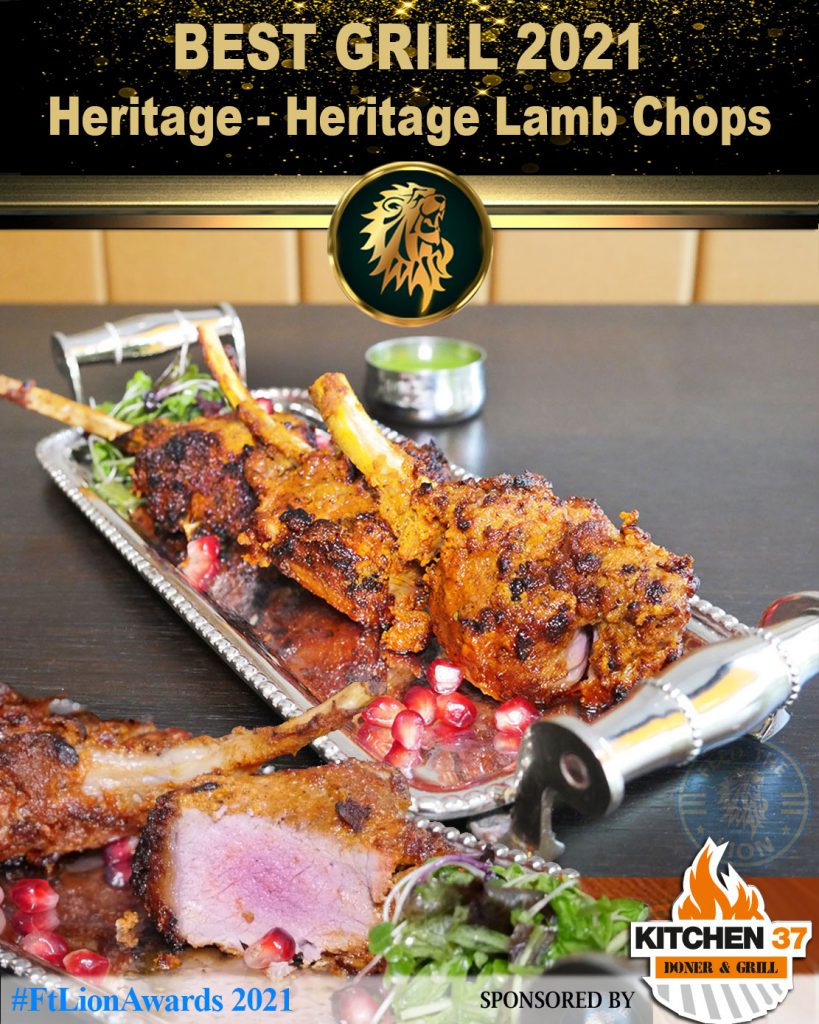 Heritage, however, go one better in this section, with their French-trimmed Heritage Lamb Chops – coated in a yoghurt-based marination, with enough heat, smoky goodness, and a hint of sweetness to make this an addictive one – winning #FtLionAwards ‘Best Grill’ 2021. 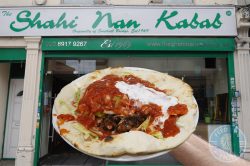 Shahi Nan Kabab… if you know, you know!

Okay, so we might have been swayed by nostalgia with our runner-up here; but for those of you who know, you know…

The original Pakistani kebab house The Shahi Nan‘s celebrated Kabab Rolls in Southall, London, are legendary in status because they are that good.

Crispy tandoor naan, smoky-charred meat kabab, all drenched in their famous chilli sauce – like we said, if you know, you know!

For everyone else, it was London Peckham’s Flamin Mangal and its Turkish Mixed Grill that attracted your vote. 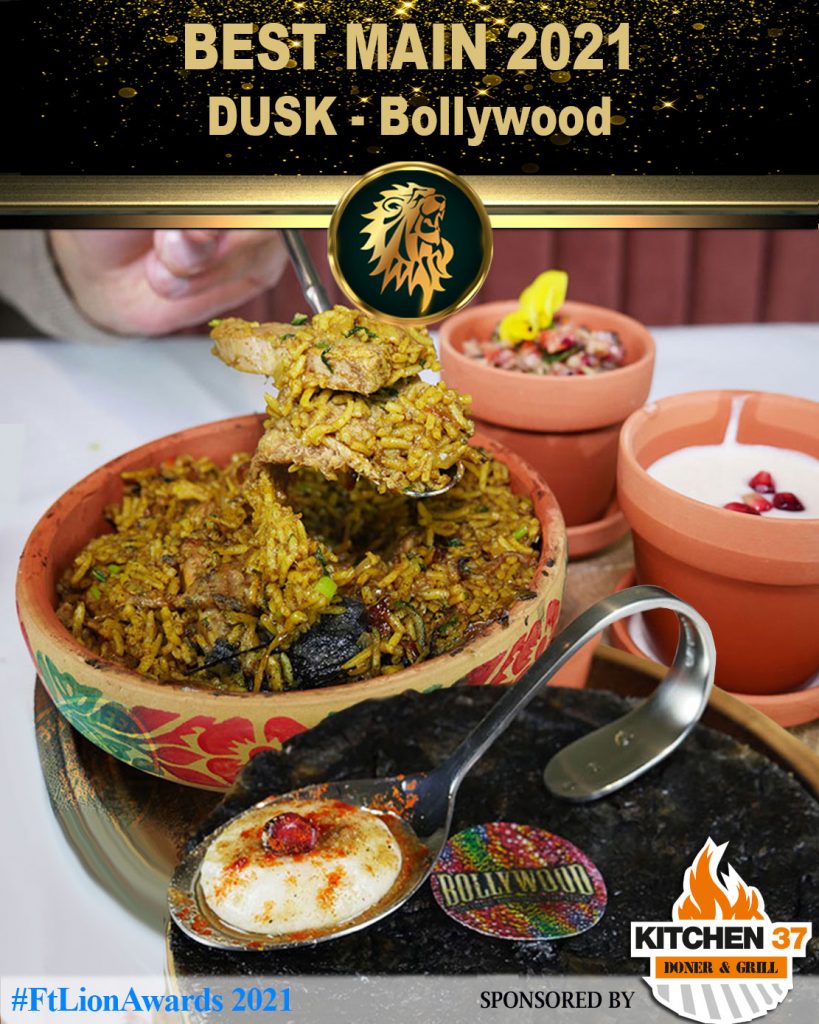 Battle of biryanis, we know; but DUSK in Essex put up what we, at the time, described as an “exceptionally mind-blowing first experience”. 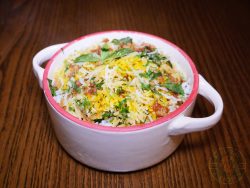 The fatty duck meat in this ‘Bollywood’ biryani was the X-factor which didn’t just make this “one of the best biryanis we’ve ever had”, but also #FtLionAwards ‘Best Main’ 2021.

To this day, we’re still trying to figure out the combination of spices achieved by Colonel Saab‘s chef that made this Hyderabadi Chicken Biryani “the best chicken biryani we’ve EVER reviewed”.

And it appears as if you also agree. A masterfully balanced dish, with spicious waves of ecstatic pleasure delivered with every bite. And because “the harmony of flavours was unlike anything we’d had anywhere else before”, this is both this year’s runner-up and readers’ choice. 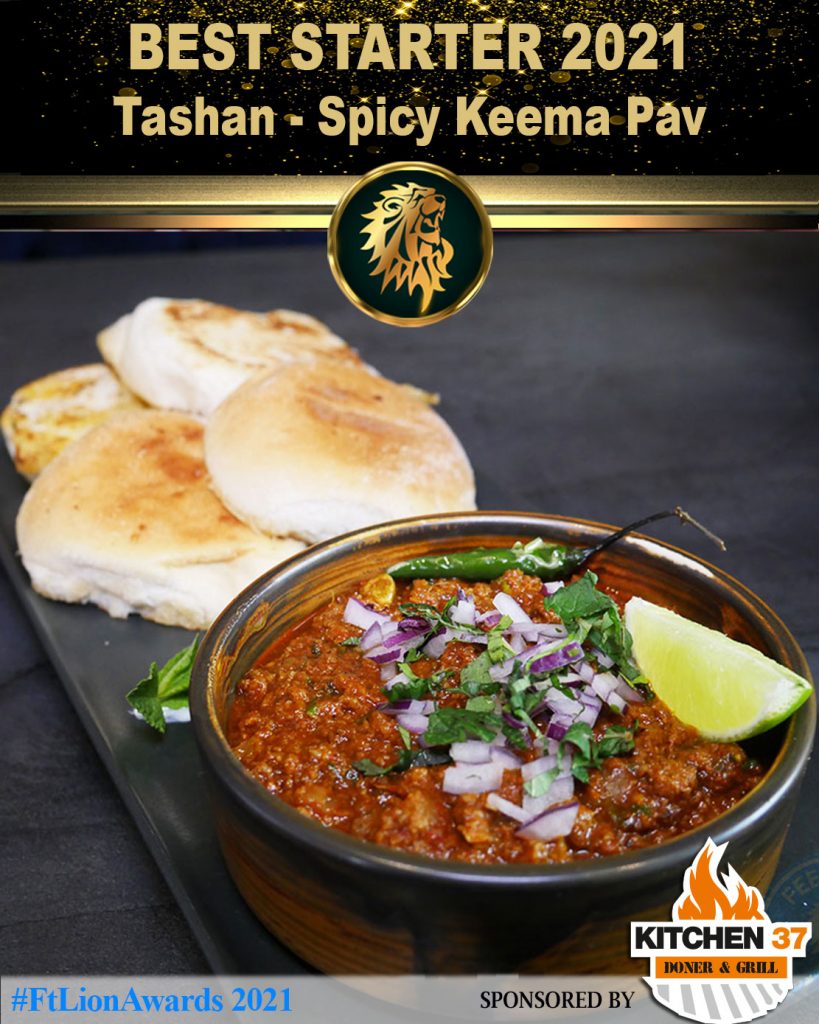 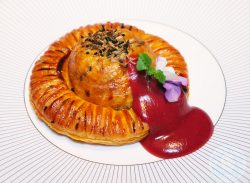 Indian restaurant Tashan in Hampstead presented one dish which, while being popular in India, was so well executed by chef and restaurateur Naveen Dogra that we came away describing it as “arguably the best keema pav we’ve had”.

The sheer precision with which the spices in this luxuriously rich and creamy mince was balanced means that this is #FtLionAwards ‘Best Starter’ 2021.

Meanwhile, Heritage‘s Potato and Quinoa Cake, which has already achieved #FtLionAwards ‘Best Veggie’ this year, has been voted by us as runner-up.

For you guys, Atul Kochhar’s Murgh Tikka Pie at Mathura was your choice. And we can understand why given that his very similar Chicken Tikka Pie served us in Kanishka was voted runner-up for our FtLion Awards ‘Best Starter’ in 2019. 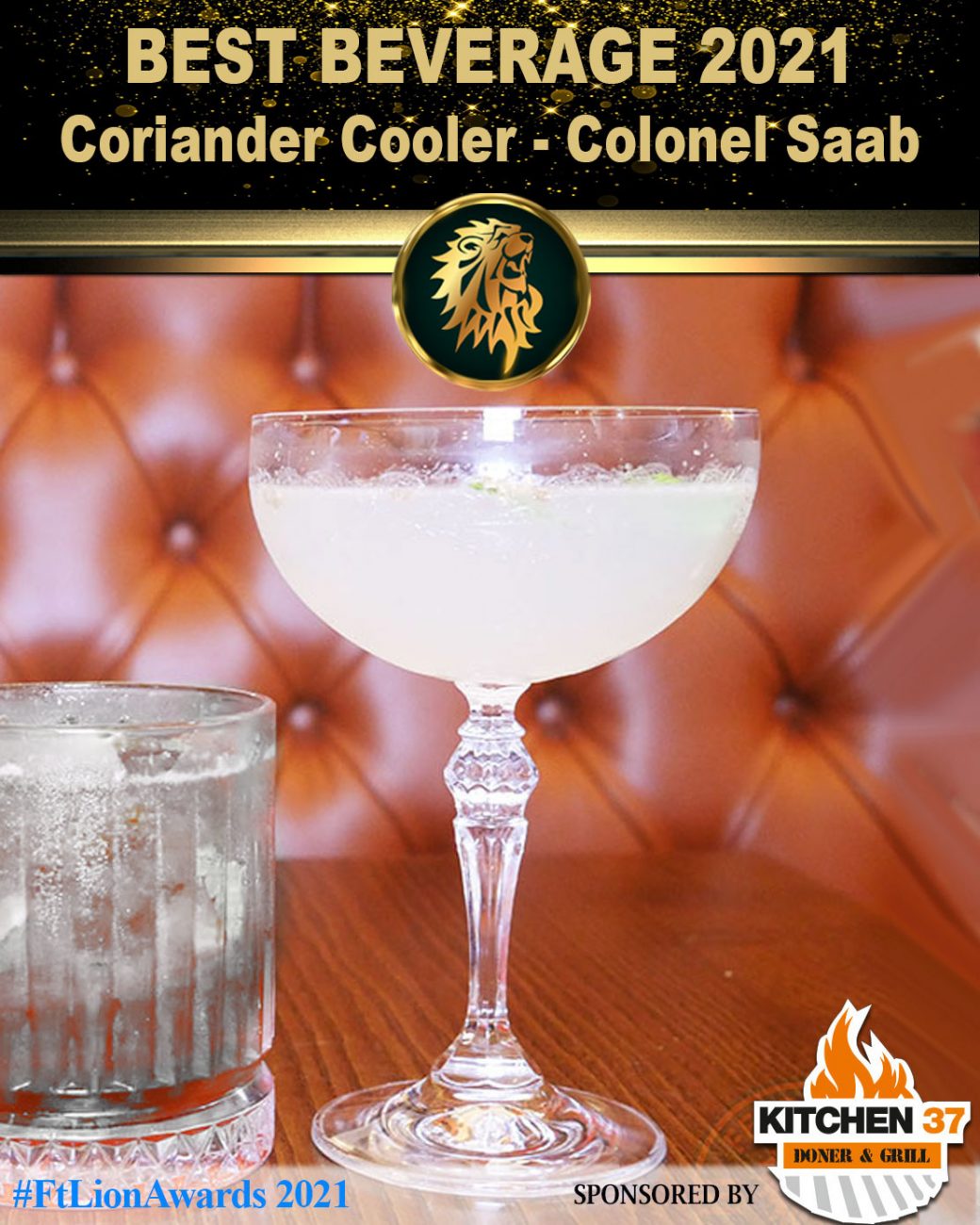 And finally, #FtLionAwards ‘Best Beverage’ 2021 goes to #FtLionAwards ‘Best Restaurant’, Colonel Saab. They presented us this stunningly good Coriander Cooler. Not an easy drink to do well (and God knows we’ve had enough experience of that); this one, however, left us stunned with its clarity. It was, as we concluded during our review, “an absolute revelation”. 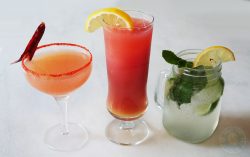 The Yellow Chilli’s Peru Paulo on the left

Runner-up goes to the punchy concoction put up by Indian celeb chef Sanjeev Kapoor’s The Yellow Chilli in London Wembley.

The Peru Paulo offered a salty-spicy rim which helped balance against the masala chaat-infused concoction, with the sweetness of the guava coming through gently.

Your preference was DUSK‘s more risqué CBD. As part of their Tea Flight, DUSK is the first restaurant we’ve reviewed to showcase this newly touted health-giving drink. Fittingly presented in laboratory beakers, this turned out to be a mild citrusy affair, with the addition of the lemon and lime pearls providing that occasional sharp fruity burst. 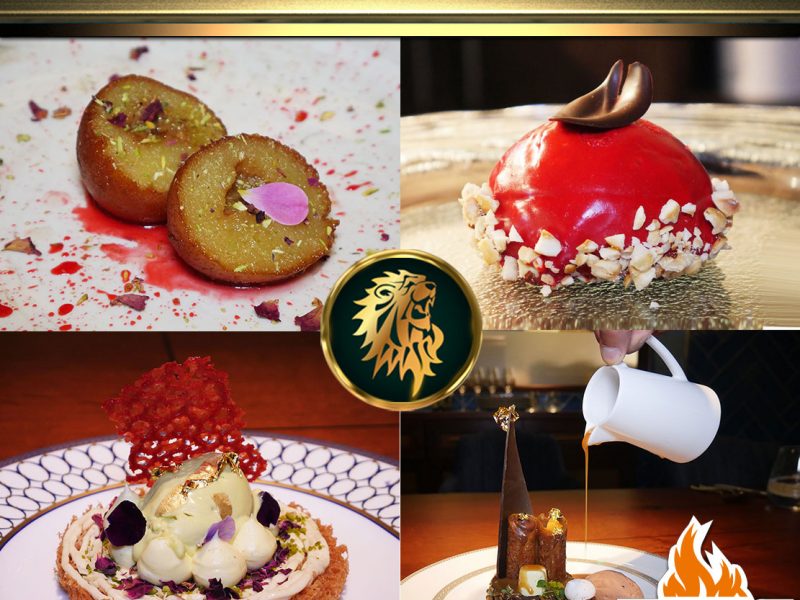